As you may know from previous posts, I’ve been doing QAIMNS, VAD and WLA for a while, but more recently I’ve started getting into other WW2 women’s uniforms as well. I’ve got the well-known book World War II British Women’s Uniforms, and there’s a picture in there of an ‘ATS officer, Scottish Command’ which I thought it would be really awesome to make a Gordon version of. Which meant getting a side cap and making a kick-pleated Gordon tartan skirt!

It isn’t that easy to find the right fabric for a skirt like this, so I got an existing skirt from eBay which was basically a women’s kilt: 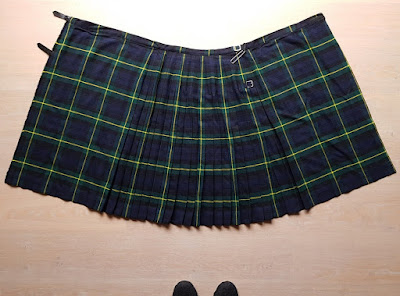 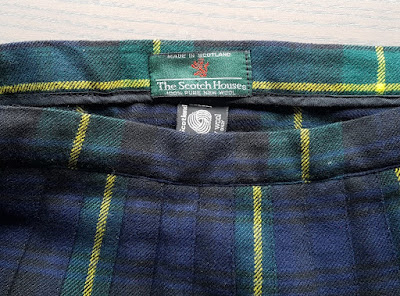 I took it apart and then made a pattern based on my standard ATS skirt, adding kick-pleats at all four front and back seams using this tutorial.


To create a neat skirt, I needed the yellow lines in the tartan to line up at the seams. My regular method of simply placing pins at those lines and sewing over them (carefully) didn’t work for this fabric (it moved, despite the pins) so I ended up using thin double-sides adhesive tape, which worked surprisingly well! I just sewed over it and tore the tape away afterwards.

This 1941 fragment of ATS girls sewing their own ‘kilts’ was of some help in making my skirt, but as I couldn’t see all the details or find any photos of an original skirt anywhere, I had to make a few assumptions. Like in the standard ATS skirt, I made a front opening with a button (black version of the standard battledress button) and two snaps and finished the waist with white petersham ribbon. Finally, I used the eBay skirt’s existing hem! 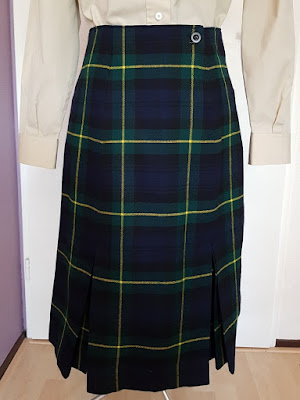 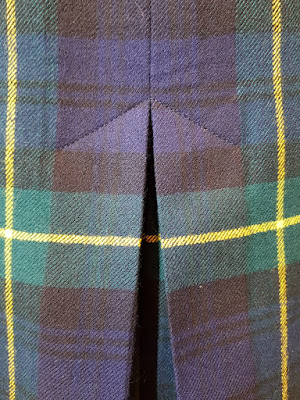 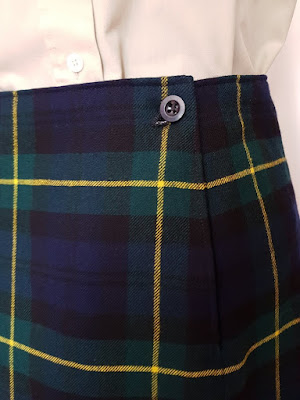 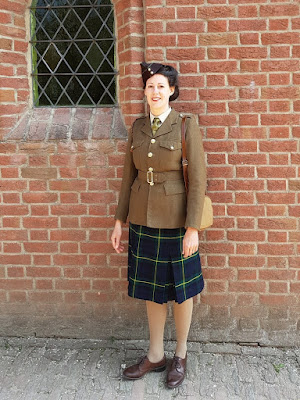 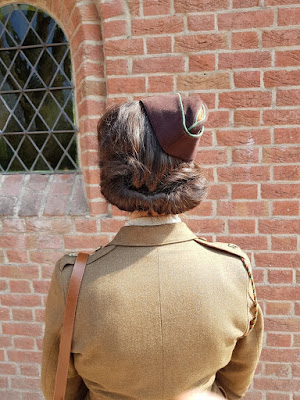 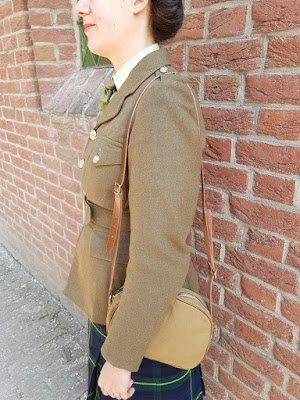 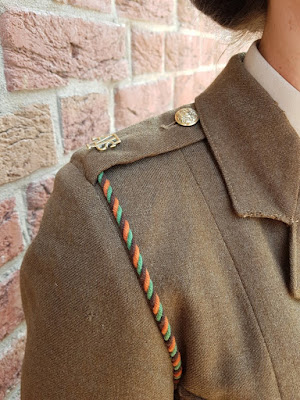 I love, love, love this uniform! I think it’s so lovely and flattering. Apparently the ATS uniform jacket didn’t live up to the wartime fashion and beauty standard at all, and people did not think was flattering at the time, as is accounted on pages 144-5 of Virginia Nicholson’s very interesting book Millions Like Us:
For a surprising number of women the main factor influencing their choice of what service to join “was the clothes. Few of them knew what to expect, so they judged on appearances. Christian Oldham (…) joined the Wrens in 1940. Years later, when she published an account of her time with the service, Christian couldn’t decide what to call it, until she casually mentioned to her editor, ‘You know, I only joined for the hat.’ They both agreed it would make the perfect title.
Christian Oldham claims to have been ‘hat-minded’ from the age of three. At twenty she was even more susceptible to the flattering double-breasted tailored jacket, svelte skirt and pert tricorne hat that comprised the officers’ uniform. Vera Laughton Mathews, director of the Wrens, had commissioned the elite fashion designer Edward Molyneux to come up with the look. ‘The effect was a winner,’ according to Christian, and entirely accounted for the huge waiting list of applicants wishing to join:
‘The great thing was, of course, that the ATS and WAAFs had these frightful belts which made their bottoms look enormous, whereas the Wrens had this nice straight uniform which concealed your worst points. Joining the Wrens was quite the most fashionable war work.’
Admittedly, the ATS uniform lacked pulling power: in truth, a single-breasted, belted khaki jacked bulked out with cumbersome pleated pockets did nothing for one’s figure. The WAAFs suffered from the same defect where pockets and belts were concerned, accentuating hips and bottoms.” 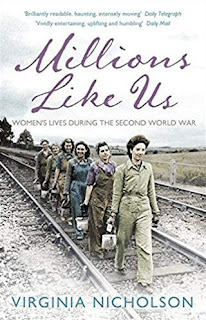 How things change! Or maybe it’s just my taste and my not overly busty and hippy figure, but the Wren (Women’s Royal Naval Service) uniform is my least favourite and I don’t think either the double breasted jacket or the hat flattering! What’s not to love about the ATS jacket, which cinches one’s waist while, indeed, adding to bust and hips? It certainly works for my 8 figure.

If you want to know more about women in the wartime services, I recommend the aforementioned Millions Like Us, a very nice read indeed!

The jacket, side cap and tie are original, the shirt and shoes are post-war military issue, the lanyard is a reproduction by my friend Anne, and the bag is from Soldier of Fortune. I certainly don’t think all their reproduction stuff is good (the ATS caps, for instance, are awful) but they did a decent job on the bag. Also, original bags tend to have lots of stains and look about as old as they are now, but I want to look like I’m wearing this uniform sometime between 1940 and 1945!


What I should add, by the way, is that these skirts, as well as the side caps, were ‘private purchase’, so non-standard items, and were only worn in Scotland, and not overseas.


Aaand when I got home I put my jacket on my ironing board to vent, and the obvious thing happened… :P 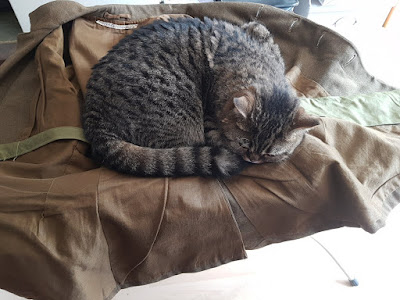 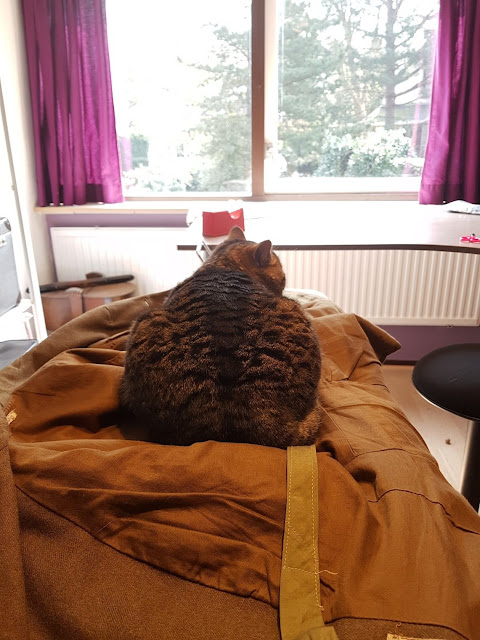 
Making this dress was so little effort that I hardly understand why anyone would go shopping! What was also easy is that it could be sewed on a regular machine, since the fabric doesn’t fray. I don’t quite understand why knit fabric doesn’t fray whereas a knit sweater that hasn’t been finished properly would, but it’s certainly convenient. I had some serger problems a while ago and didn’t feel like doing lots of test runs now, so I just sewed this on my regular machine using a zigzag stitch. I also zigzagged the hem and sleeves, as the usual double needle stitching causes a tunnel, which I find a lot less professional looking than a nice flat zigzag! 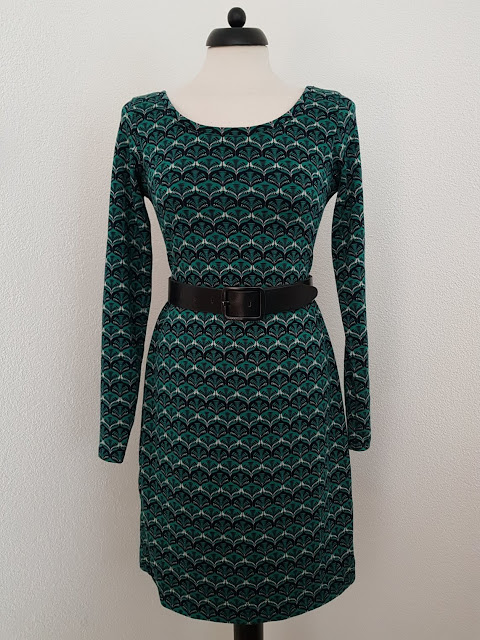 I got the pattern in Closet Case Patterns’ thanksgiving sale. I didn’t want the dress to have the bodycon effect it’s supposed to have as I have high hips, so a looser fit is more flattering on me. Therefore I cut a size 16 (!), although I ended up sewing a 14 – and grading to 12 at the arm hole. I ended up using the sleeves from the Lady Skater Dress pattern by Kitschy Coo as I thought the Nettie sleeves were strangely off the shoulder. And I added a seam in the back piece as a swayback alteration. So in the end I guess I might as well have improvised this dress based on my tried and tested Lady Skater pattern, while I was trying to make things easier for myself by not improvising… However, this way I also have a bathing suit pattern for when I want to make a 1920s bathing suit. 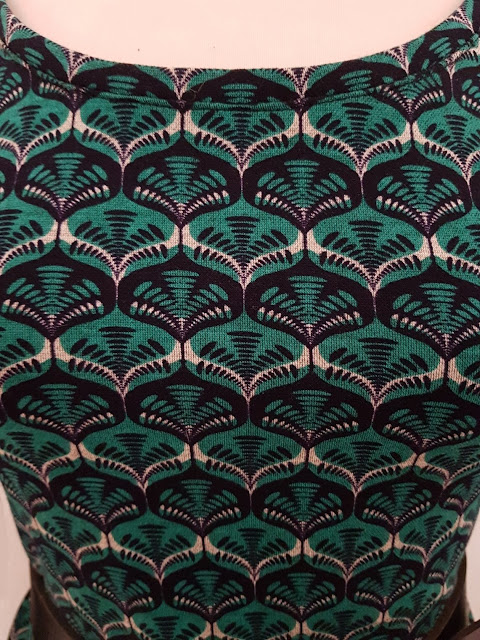 I liked the colour and pattern of the fabric (and its name, as I love Portugal – although Portuguese tiles or azulejos are usually blue) but I’m certainly not going to buy fabrics with a high artificial fabric content anymore. When I buy clothes I always check the label first and don’t even try them on if they’re not made of natural fabrics, since those are so much more comfortable to wear and also more environmentally friendly (washing artificial fabrics causes microplastics to end up in the water!), and it’s rather silly to put in effort making my own clothes by a different standard.

Posted by misshendrie at 21:51 No comments:

Pattern: Miette by Tilly and the Buttons

A while ago I made a jeans wrap skirt using the Miette pattern from Tilly and the Buttons. Another fine example of sewing with kitty! :P She attacked my scissors while I was cutting the pattern paper, my pencil as I was tracing… She sneaked up on me and I noticed for the first time that I do not hear her walk! One moment she’d be three metres away, the next, two metres closer. Veeery relaxed sewing knowing that you might be jumped at any moment without hearing it coming! Needless to say sewing this skirt went very quickly, too. 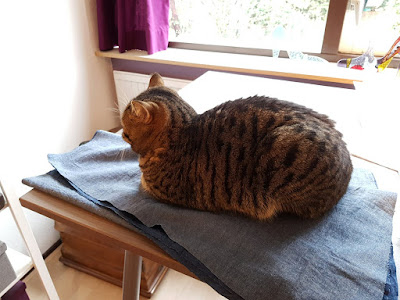 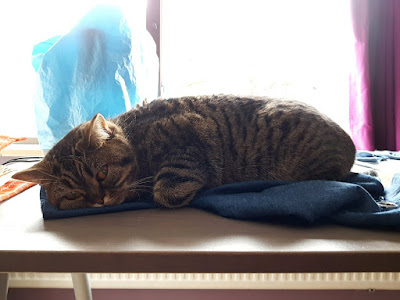 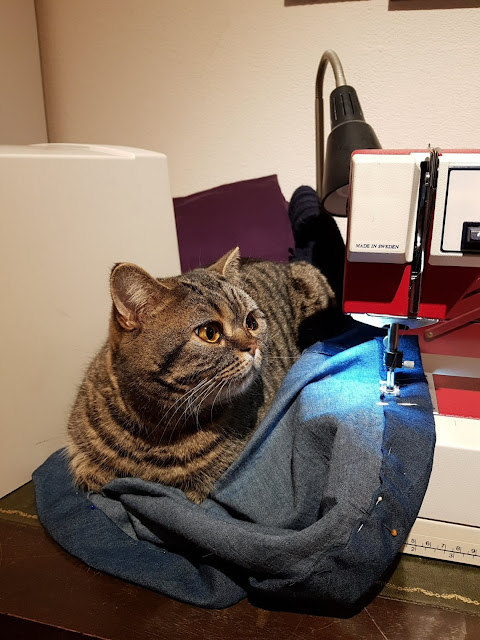 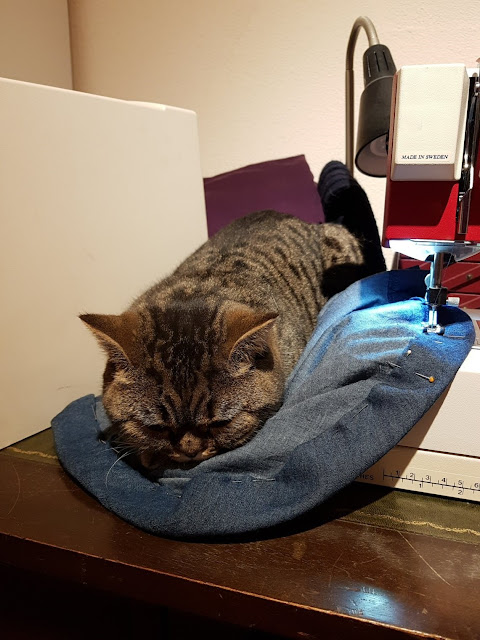 Hehe, Juniper isn’t a terrorcat by any means, she just gets playful around sewing materials! And I have since learned that if I want to make things easy for myself the best time to cut my fabric is during her afternoon nap of four hours!
So, I did finish the skirt eventually. Apart from the feline intervention, the pattern (which is meant for beginners) was easy and quick to sew and the resulting skirt is very comfortable to wear, although it does freak me out a little that the overlapping flap at the back could be lifted by the wind when I’m outside, or accidentally be pushed aside when I move. As you can see from the foliage I took these photos very recently :P. 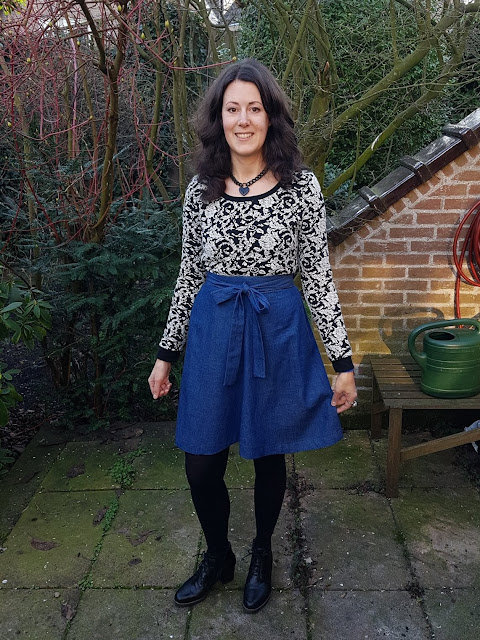 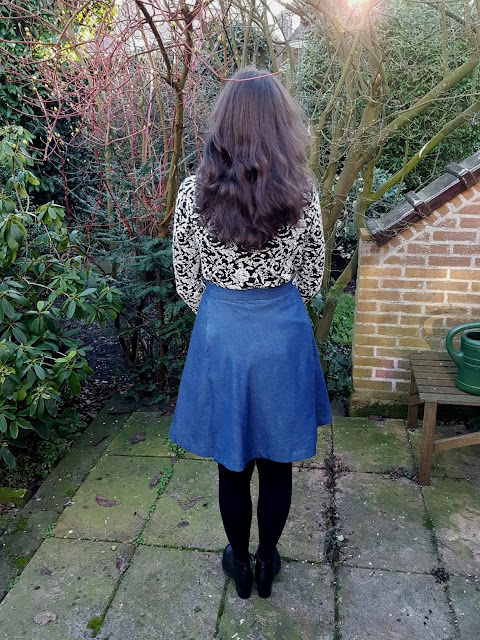 Posted by misshendrie at 20:12 No comments:

Hey y’all, I took a bit of a break from blogging because it was feeling too much like a chore and I wanted to focus more on sewing rather than writing about it. But now I’m back and have quite a few unblogged projects, so you can expect many more posts the coming time.

One of the things I’ve made is a 1940s half slip. I improvised the pattern, which is a simple A line skirt. I used a white viscose fabric which I dyed powder pink using Dylon fabric dye in the colour powder pink :P. Strangely this colour, among a few others, is not sold in my country so I had to get it from eBay. I used this colour before to dye some granny underwear from Hema that I use with 1940s clothes (see here) and the colour turned out much brighter, and also a different shade (less peach pink), on that cotton fabric than on this viscose, but the resulting very light pink was what I was going for. It’s a classic 1940s underwear colour. 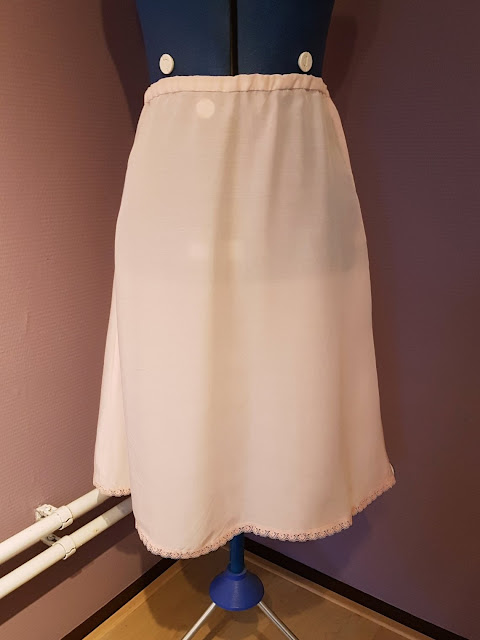 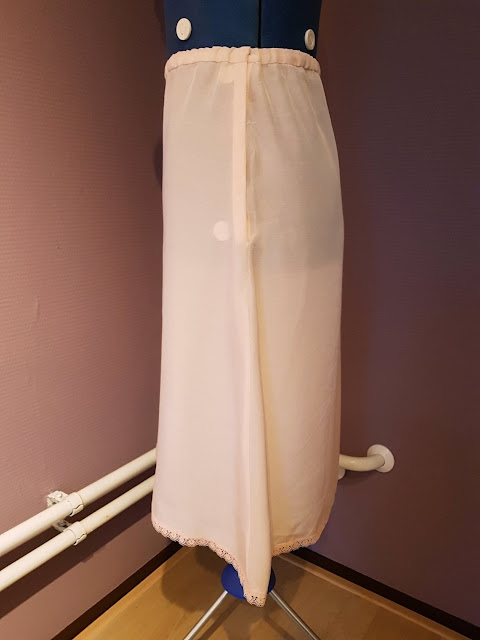 I made French seams because the fabric is quite thin and sheer, and a placket with snap fasteners and a hook and worked eye to close the slip. I might replace the snaps with more hooks and eyes though, because they have a tendency to pop open when I sit down! 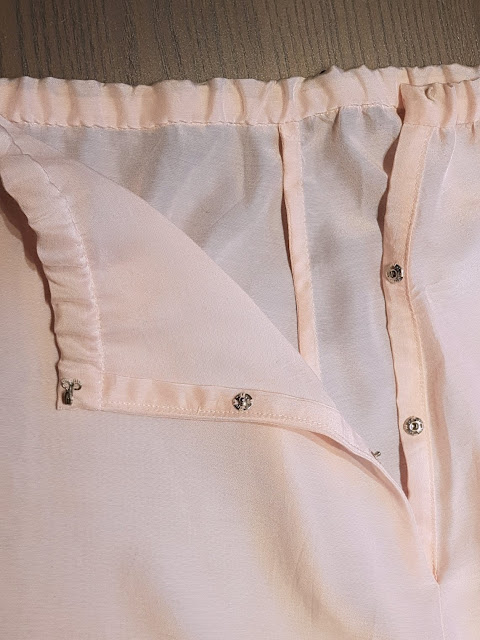 I learned a ‘couture’ technique for sewing on hooks for this project. Doesn’t it look nice? 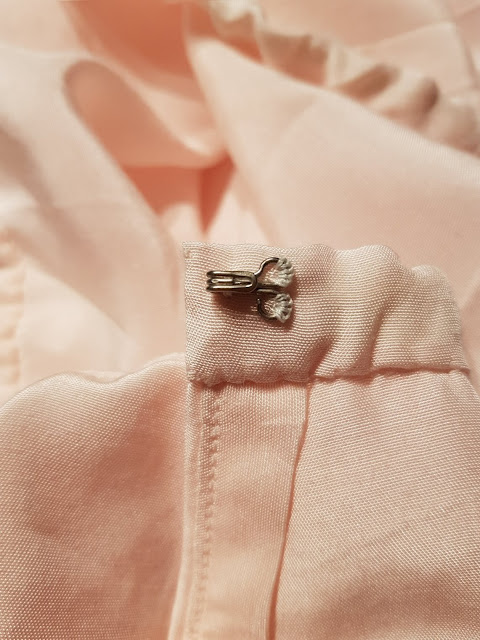