Dressing a Highland officer of the Napoleonic era

It was rather quiet here for a few months, because I was working on a big project – dressing a highland officer of the Napoleonic era. This outfit comprises a shirt, neck cloth, waistcoat, jacket, tartan trews, humble bonnet, and a black cape. I did not design these myself, but instead, tried to make them as much like the originals would have been, as possible.

About the Gordon Highlanders 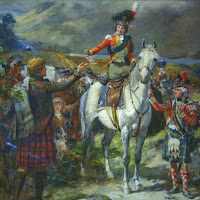 The Regiment of Foot, the Gordon Highlanders was raised by the 4th Duke of Gordon in 1794, during the French Revolutionary Wars (1792 to 1802; followed by the Napoleonic Wars, 1803 to 1815). A well-known story is that the Duchess of Gordon, Jean, helped recruit privates, and offered a kiss to each who joined. The image on the right, a watercolour by William Skeoch Cumming, shows the Duchess recruiting, although it was painted in 1897, so it may not be an entirely correct depiction of clothing and circumstances.
The regiment earned its first battle honour in Holland, at Egmont-op-Zee, and also fought in Egypt in 1801, the Peninsular War from 1804 to 1814, and of course at Waterloo in 1815, where it played an important role in Napoleon’s final defeat.

After the Napoleonic Wars, the 92nd R.o.F. served in India, again in Egypt, in Sudan, and in South Africa, during the 1st and 2nd Boer Wars. About 50,000 Gordons served In World War I, of whom approximately 27,000 were killed or wounded. In World War II, the regiment achieved great success in the North African campaign, Sicily and Italy, advanced into Germany, and liberated Burma.

In 1994, the regiment became part of The Higlanders, the new regiment of the north of Scotland, which also included the Seaforth and Cameron Highlanders. In 2006, The Highlanders were fused with Scotland’s five other infantry regiments, to form The Royal Regiment of Scotland.

The uniform below is a reproduction of the type of uniform worn at Waterloo by lieutenants of the 92nd Gordon Highlanders. 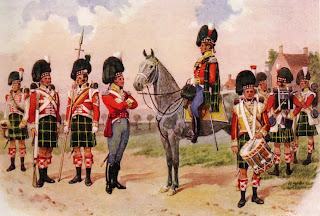 The original regimental attire is described as follows in The Life Of A Regiment, The history of the Gordon Highlanders from its formation in 1794 to 1816: “They wore the full Highland dress or “breacan an-fhéilidh” – that is, plaid and kilt in one, called in Regimental Orders “the belted plaid.” The officers had twelve yards, or rather six yards double-width, of Gordon tartan, but of rather a smaller sett than was afterwards used. The rank and file had a smaller quantity. The officers’ purse [sporran] was badger-skin, having a silver rim round the top, and six silver-mounted tassels. The purses of the rank and file were of grey goat-skin, with six white tassels. The hose of all ranks were cut out of the strong red and white tartan cloth known in the Highlands as “cathdath” or “battle colour,” which was worn by all Highland corps, and by the better class of civilians when in Highland dress. The rosettes and garters were scarlet; the sash was crimson, and was worn over the left shoulder by both officers and sergeants. The officers wore a gilt gorget.
(...) The head-dress consisted of the round bonnet then commonly worn in Scotland, but cocked and ornamented with ostrich feathers, and having a diced border of red, white, and green, said to represent the “fess chequé” in the arms of the Stuart kings. It had a hackle fastened over the left ear by a black cockade, with regimental button on it. This hackle was white for the Grenadier Company, green for the Light Company,  and for the battalion companies the lower half was red and the upper white.
The jacket was scarlet for officers and sergeants, and red for the rank and file, with lapels turned back with yellow, showing the waistcoat, and laced two and two; lace silver with blue thread in the centre; silver or plated buttons, with the number of the regiment in the centre. Epaulettes – two for all ranks of officers, of silver bullion, having two stripes of yellow silk in the centre of the strap, with a gold-embroidered thistle and a binding of blue round the edge. The n.c. officers and men had white tufts for battalion companies and wings for flank companies. The officers’ waistcoat was scarlet, laced with silver.
(...) The officers were armed with the Higland claymore, worn at the back, fastened by an oval breastplate of silver, having a crown and thistle, surrounded by the words “Gordon Highlanders”; they had also a silver-mounted dirk. The sergeants with claymore and pike. The rank and file carried flint-lock muskets, the barrels brightly polished, and bayonets.”


Sources:
The Gordon Highlanders Museum website
The Life Of A Regiment vol. I, by Lt.-Colonel C. Greenhill Gardyne, 1901

The items I made are a shirt, neck cloth, waistcoat, jacket, tartan trews, humble bonnet, and a black cape. The kilt and feather bonnet are the only things I did not make!

I started with the white linen shirt, which I made longer than a gentleman’s shirt would generally have been, because it is mainly worn under a kilt, and kilts are made of prickly wool! The longer the shirt, the less leg-kilt contact. I read about the idea of embroidering a number on each shirt you make, and thought that was a fun way of keeping track of sewing progress, so I incorporated it. This is the second shirt I made; a few years ago I made the first, and this one is definitely an improvement, if only because I made the first one out of an old sheet (cotton). Linen is better!

I made the waistcoat before the jacket, because I wanted to make sure the jacket actually fit over it.
The waistcoat is made of scarlet wool fabric, and lined in white cotton and linen mix. It has slit pockets on both sides, and 10 buttons with the number 92 on them. 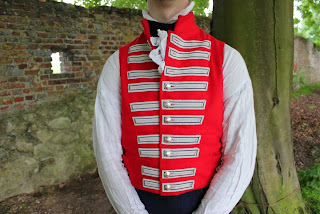 The cape was relatively simple to make. It is made of black wool and lined in white linen. It approximates a half circle, with seams at the shoulders for a good fit. The brass lion heads keep the cape closed at the neckline, but the seams are what keeps it in place. 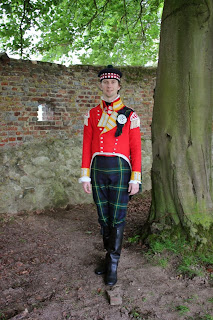 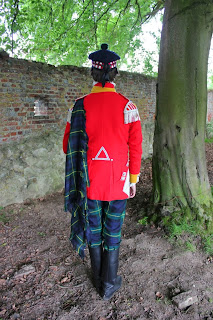 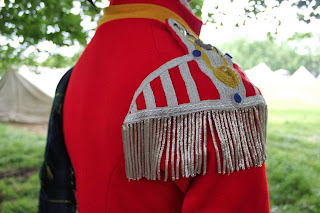 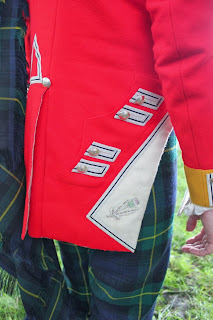 The ‘humble bonnet’ was worn by soldiers and officers when not in battle or on parade. I made this officer’s version by weaving red, white and dark green satin bias band for the border, basting it in place, and then sewing the wool brim and linen bottom border onto it. The pompom is made of wool knitting yarn.

I based the tartan trews on a pair of gentleman’s breeches I made before, lengthening the pattern and also combining the front and back part of the leg. Because any seam in the tartan fabric tends to be very visible, it was preferable not to have a side seam. I placed the pattern on the fabric in such a way that both sides of the trews were exactly mirrored, and tried to make the tartan match on the seams wherever possible.