Pattern: Improvised, based on measurements mentioned in an ad from the period
Fabric: Cotton lawn
Haberdasheries: none

It’s 1916 this year, and this means that instead of the adorable Sister Dora caps my fellow WW1 nurse re-enactresses and I used to wear, we will start wearing the veil that was introduced in late 1915.

Because the 'Army veil' looked more professional than the Sister Dora cap, some auxiliary hospitals decided that their VAD staff could wear them as well. This step found disfavour among trained military nurses!
A Matron-in-Chief in France reported: "Found some of the VADs with Army caps on at Etaples, and was informed they were permitted to wear them. Instructed them to wear Sister Dora cap until I gave them other instructions and wrote to the Matron-in-Chief on the subject on 23rd inst." (War Diary of Matron-in-Chief, The National Archives, WO95/3988, 27 October 2015
At about this time the VAD headwear was officially changed by order of the Joint War Committee. The Sister Dora cap was phased out, and substituted with a style that became iconic for the Great War VAD.

This style of veil is different from the QAIMNS one. (Of course, it would have been too easy for us if we could have used the QAIMNS veils we already had!) This one is made of lawn, and rectangular in shape, about 47 by 70 cm. 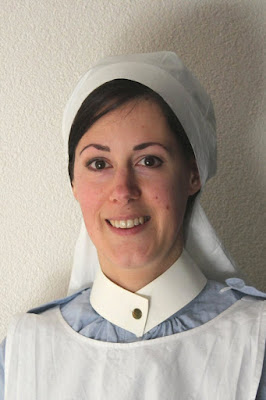 I thought it would be very hard to put on properly, but we practised with it during a recent nurses’ sewing and training weekend, and it wasn’t actually that hard. And I don’t think it actually looks that much worse than the Dora cap, either.
Posted by misshendrie at 20:52