The first time I saw bracelets with interchangeable ‘chunks’ by Dutch brand Noosa at a store in Germany I loved them, but since I needed three chunks plus a bracelet to make just one combination, and that amounted to about €55, I didn’t buy them. (Not to mention the bracelets were huge on my tiny wrists.) Sometimes I came across the chunks in a store again and ogled them, but I realised I probably wouldn’t wear them if I bought them.
Then I found out that there are also rings for these snaps! Now that was a great idea! I love large rings, and this meant that with every chunk I bought, I’d have a new ring! Also, I found that there are different brands besides Noosa that sell snaps, and mainly that there are lots of nice ones to be found on Etsy! Needless to say, before long I had a whole collection of snaps, and I’ve been wearing them a lot! 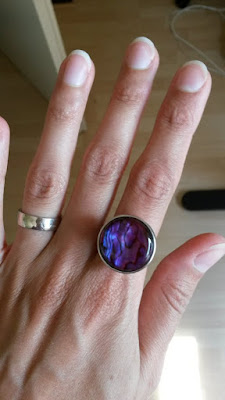 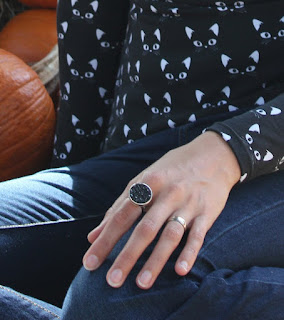 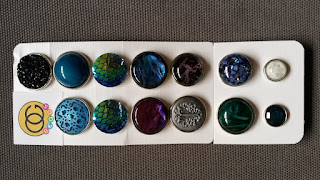 Unfortunately the ring I bought was the kind that looks like stainless steel but is actually brass with a ‘silvertone’ layer over it. The layer started disappearing after I’d worn the ring about ten times, and after a few months of admittedly intensive wear, the ring became weak and easily distorted, and also, really ugly. Plus it leaves a blue stain on my finger. I haven’t managed to find a good quality ring yet. Some say putting clear nailpolish on it prevents the layer from coming off, but now the ring exudes nailpolish smell when I wear it. Meh. Obviously this has dampened my enthusiasm a little, but I still had so much fun wearing my snaps last year that I thought they were worth a mention!
Posted by misshendrie at 21:03