Yesterday I posted my wedding dress. But that wasn’t the only homemade thing at our wedding! 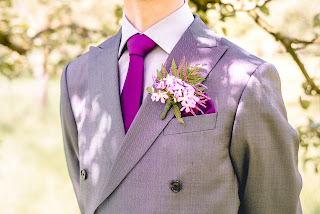 I wanted to make a tie and pochet for my fiancé using the same fabric I used for my dress, so we would match exactly. Also, I had never made a tie before, and that seemed fun to try.

I tried the Purl Bee tie pattern first, but the pattern pieces did not line up at all! They formed a zigzag :s. Also, the pattern did not specify at which scale to print, and how large seam allowances are!

So, I bought a cheap tie, took it apart, and traced the pieces of fabric to make a pattern. I cut the cotton fabric on the bias and added very thin fusible interfacing to the three pieces, as the fabric was rather thin.

I used the heavyweight sew-in interfacing from the bought tie, which was already cut to size and made the purple tie nicely thick and real-looking. Once I’d sewn the three pieces of cotton together, I just folded them over the interfacing and sewed them together by hand in the middle. As the loop through which the narrow end of the tie goes to secure it, I added the label from an old tie of my father’s, as a joke.

The pochet is simply a 24.5 cm square (including seam allowance), hemmed by machine. I think they’re usually larger, but the pocket it had to fit into was quite narrow, so I made this one smaller.

As I couldn’t find a petticoat that had the right fullness as well as the right colour, I bought two Hell Bunny petticoats in dolly pink, cut one of the two layers off one and sewed it onto the other.
Strangely, the amount of ruffling on the petticoats varied greatly; some ruffles I didn’t find full enough to peek out from under my dress, while others were fine. Obviously I picked the fullest ruffles for the outside layer. 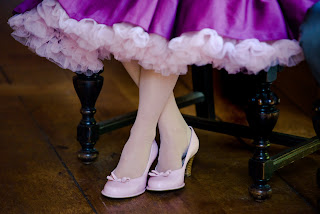 I wanted all my accessories to be light pink, but of course, I didn’t want several different shades. So I cut my veil from the leftovers of the second petticoat, so they would at least match that. I cut three strips that were as wide as I could make them, which was 22 cm, and about 66 cm long, and the hairdresser firmly stuck them into my hair with a bobby pin each.

I am not exactly a shoe person, and had trouble finding nice shoes to go with my dress. First I looked for light pink ones that happened to match the other light pink items, but of course there was little hope of that. Even when I just looked for light coloured shoes that I could paint in the right colour, I still didn’t find any nice ones in any shop! So I ordered these Clarks Bombay Lights online, and luckily found them quite comfortable, as well as a bit vintage looking.

I painted them with Angelus acrylic leather paint. I bought colours 191 (shell pink) and 186 (hot pink) and mixed them – and managed to get exactly the right colour! The shop assistant told me to add the darker colour to the lighter one drop by drop because the lighter one would change colour really quickly, but that wasn’t the case at all :P. Adding drops to the bottle also didn’t work, as shaking didn’t make them mix in properly, so I mixed some paint in a bowl instead. I only needed a tiny amount, even though I painted several layers. The paint worked well, and the stitching on the shoes remained nicely defined. I did find it a little sticky, and I didn’t like the ‘satin finisher’, which didn’t create a satin sheen but a very shiny one! So I decided not to use it. 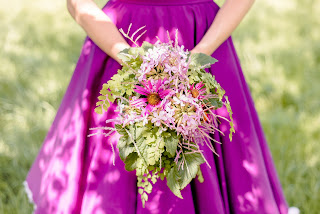 My beautiful bouquet was made by my mother! She picked the flowers at the Botanical Gardens where she volunteers. I found that, and the fact that she made the bouquet, a really nice idea. Also, this meant I saved a lot of money, but the main reason for asking my mum was that I know she’s really good at flower arranging, whereas getting the bouquet from a florist would have been a gamble tastewise. My best friend actually left her bouquet at home when she got married, because it was so not what she wanted…

We spent a whopping €29,55 on the flowers, corsages and boutonnieres. Not too bad! This was actually spent on the basic materials – bouquet holder, florist tape and corsage magnets– as the flowers were free. 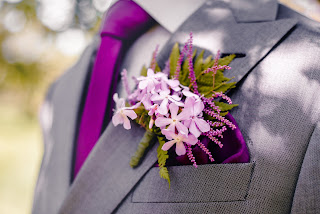 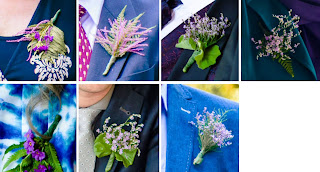 Corsages are very easy to make. The florist tape sticks to itself, and can easily be wrapped around a magnet to hold it in place. The other magnet goes behind the wearer’s garment, which is thus not damaged by a pin going through. 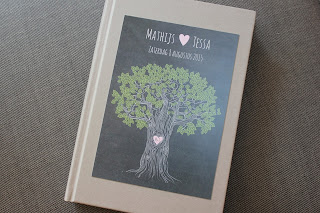 (Photo by me)
After searching for a guestbook for a little while, I realised I was actually looking for one that resembled our invitation card. So I thought: why not buy a dummy book and glue one of our surplus cards onto it? I also like the paper in dummy books – matte, cream-coloured and quite thick.

The pink hearts on the card and the guestbook matched my accessories, by the way! And the letters inside the card had the same colour as my dress. 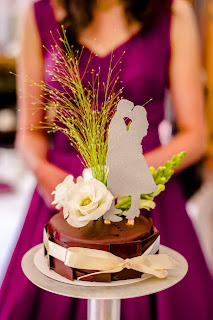 Searching for nice cake toppers, I came across silhouette ones, which I really liked, also because of the historic aspect.

I did actually want the silhouette to be ours, so when my fiancé had picked up his suit and my petticoat and dress were finished, we took a photo of ourselves from the side! I cut out the silhouette on the computer and printed it onto printable shrinky dinks foil, as large as would fit onto an A4 sheet. Strangely, the shrinky dinks shrunk more widthways than lengthways, so I had to multiply the width by 1.25. But then it turned out exactly as I had hoped.

Initially I wanted the silhouette to be black, as is traditional, but the black printer ink was damaged when I cut the silhouette out before baking it. Also, I thought black didn’t really match anything and was a bit gloomy. So, as we happened to have a can of silver spray paint, I made a silver silhouette instead.
I stuck bamboo forks to the back to be able to mount it on the cake.

Photos by Happy Photographer, unless otherwise specified. The guest corsage pictures are just fragments of the photos.
Posted by misshendrie at 20:35