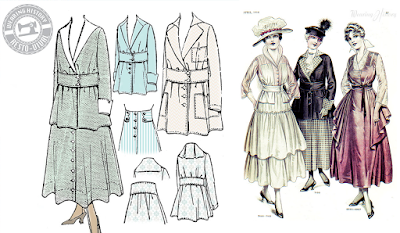 When this pattern appeared on the Wearing History website, I immediately wanted to make it. I have loved the 1920s style for as long as I can remember, and this look, though from 1916, is very 1920s-like!

I bought the pattern as a print at home e-pattern because that was cheaper and I’d have it more quickly. At first I found sticking all the pieces together a kerfuffle, but actually it was quite fun, and I realised after that I could just cut the pattern out, rather than having to trace it. It would have been really great if there had been an overview of all the pages, though, because two pages contained nothing except the sticking lines, so I wouldn’t actually have needed to print those. I don’t like wasting paper.

I decided to fashion this suit in spring green linen, with a green silk with woven in leaf design for the collar, cuffs and cover buttons. As my fabric was thin, I lined it with thick white cotton, treating both layers as one. On second thoughts, perhaps the lining fabric was a bit too thick, because some seams became quite bulky. But this does make the jacket and skirt hems stand out a bit, which is nice.

On the original pic, the shoulder seam is neatly at the shoulder and doesn’t hang off it at all, but it did with me, whereas my shoulders are not narrow. So I sewed the sleeves in about an inch higher than the pattern said. 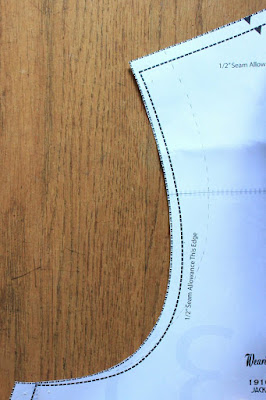 I folded the bottom of the jacket at 12 cm from the bottom, cut about 6 cm off and hemmed it. I also fixed the facing in place. I think the pattern suggests to leave it loose, but the silk I used frayed very much (as does all silk), and also, the facing showed a bit at the neckline when I put the jacket on.

Unfortunately the inside belt construction on the skirt didn’t work for me. It puckers and does not keep the skirt at the heightened waist typical of the period. 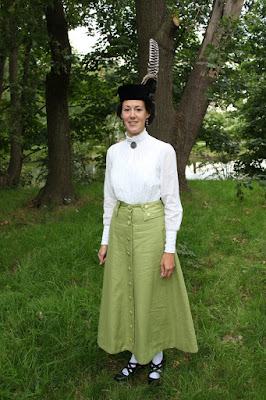 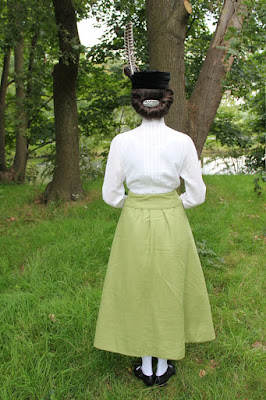 I must admit I’m wearing the suit without my corset here, as I don’t dare wear it anymore because it gives me numb hips… This suit is rather suitable for going corset free as the jacket is so wide, it’s definitely got a dress reform or rational dress feel about it. But it would still have looked better, and more authentic, with a corset underneath. 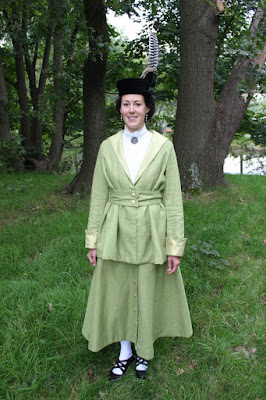 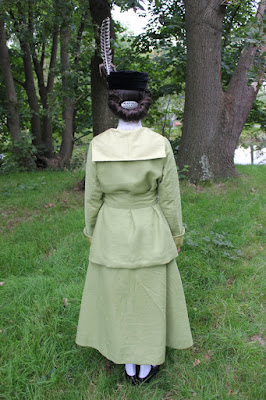 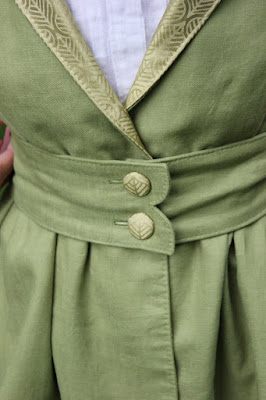 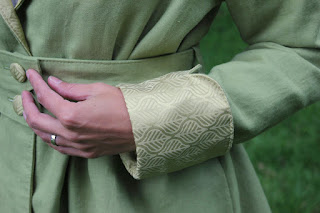 I like how this suit has turned out, and it makes me stand out a bit at events because it's more modern than what most people (depicting civilians in World War I) wear. People do notice that. I would not recommend this pattern if you want to look slim at all, though! The jacket really makes my waist disappear.