Yesterday I posted the cuffs and ruff I made for my husband to wear at the ‘Battle for Grol’ event. I also made something for myself, which was a nice dainty muff!

To make this muff, I first took a strip of silk and sewed gold band and small pearls onto it. Then I sewed the strip into a cylinder shape. I then cut a wider piece of fake fur and sewed that into a cylinder as well, after which I added both cylinders together on one end. I then realised that if I stuffed the muff, the filling would probably look bumpy beneath the silk, so I also made a cylinder out of cooker hood filter and put that in before adding the stuffing. I placed only a little stuffing inside the tube, and added more inside the edges so they’d stand out nicely. This also makes it impossible for wind to get into the muff, so it actually keeps my hands very nicely warm! Finally, I hand sewed the last cylinder edge closed. 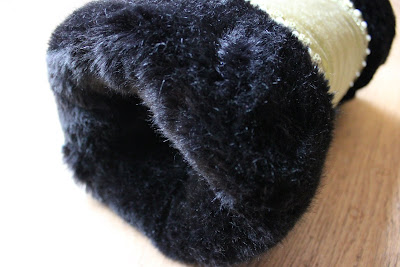 Here are my two muffs side to side for comparison: 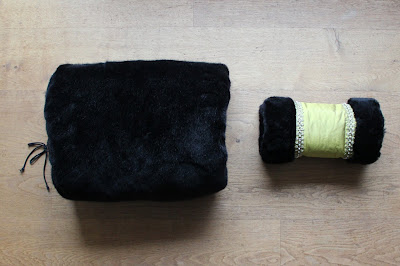