A few years ago I took part in Lucky Lucille’s Sew For Victory and Spring For Cotton sewalongs. Here’s another one that seems nice to take part in, especially as her website states “This is a gentle challenge. It’s not one that you can fail. It’s meant to be flexible”! =) I’ve been trying my best not to stress myself by imposing deadlines on myself anymore, so a gentle challenge is the only thing I want to be going for…

Here are my choices, though in no particular making order! 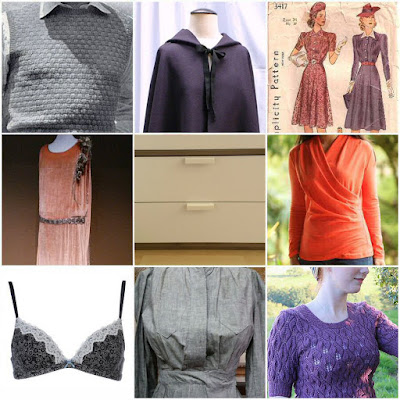 Project #1: 1920s-40s knitted men’s slipover
I’d like for my husband to have a full civilian outfit for both the 1920s and 1940s, and this is the first part of it. This project’s already on the needles!

Project #2: Napoleonic short cloak
Last year I made a 17th century cape for my husband, and I’ve got enough left of the wool fabric to make myself a short cloak for another era. Since I always borrow his Napoleonic cape, it would be nice for both of us if I had one of my own!

Project #3: A new 1940s dress
I’ve been (occasionally) doing World War 2 events for a few years now, but there aren’t that many clothes in my 1940s wardrobe yet, and even fewer that are a colour that actually suits me! So I want to make a new 1940s dress in a nice bright colour pattern. My husband and I have been taking 1910s-40s dancing lessons, and I'd like to go to a lindy hop party in full 1940s attire.

Project #4: 1920s party dress
Last year I went to a nice historical clothing exhibition at the Centraal Museum in Utrecht (well, actually it was both historical and more recent fashion, but I largely ignored the contemporary pieces! :P), where I saw, among other things, this lovely 1920s dress that I’d like to recreate. Probably in blue, though. I’d love to wear this dress to a 1920s party!

Project #5: The Drawers of Doom
(Imagine dramatic background music) These are the drawers of my fabric cupboard. There are four of them. And since they are full of UFOs and bought clothes needing alteration (yes, all four of them!) I call them the Drawers of Doom (D.o.D.). This year, one of the main sewing related things I’d like to do is to get the D.o.D. a lot emptier than they are now! Then I could do something nice and handy with these drawers, such as storing my yarn stash in them =).

Project #6: Brasov wrap top
I really like Welmode’s Brasov top, and would like to make one as well.

Project #7: Underwear!
For years now, I’ve had trouble finding nice underwear, so I thought I’d have a go at making it myself. It would be awesome, once I’ve got a good pattern, to never have to look for underwear that it exactly to my liking, again!

Project #8: WW2 QAIMNS uniform
I’ve got two World War 1 nurse uniforms, and a Boer War one, and since I already bought suitable fabric for a WW2 version a couple of years ago, and had a look at an original last year, why not make the WW2 one as well? I suppose this project has the lowest priority, though, as I haven’t got any WW2 nurse events planned yet.

Project #9: It Cannot Fail To Please sweater
As I said under #3, I’m hoping to add more deep winter colours to my 1940s wardrobe, so I’ll be making this in dark pink.
Posted by misshendrie at 16:35