Two weeks ago I joined the Sew For Victory sew-along, and I finished my project, a 1940s day dress, right in time! 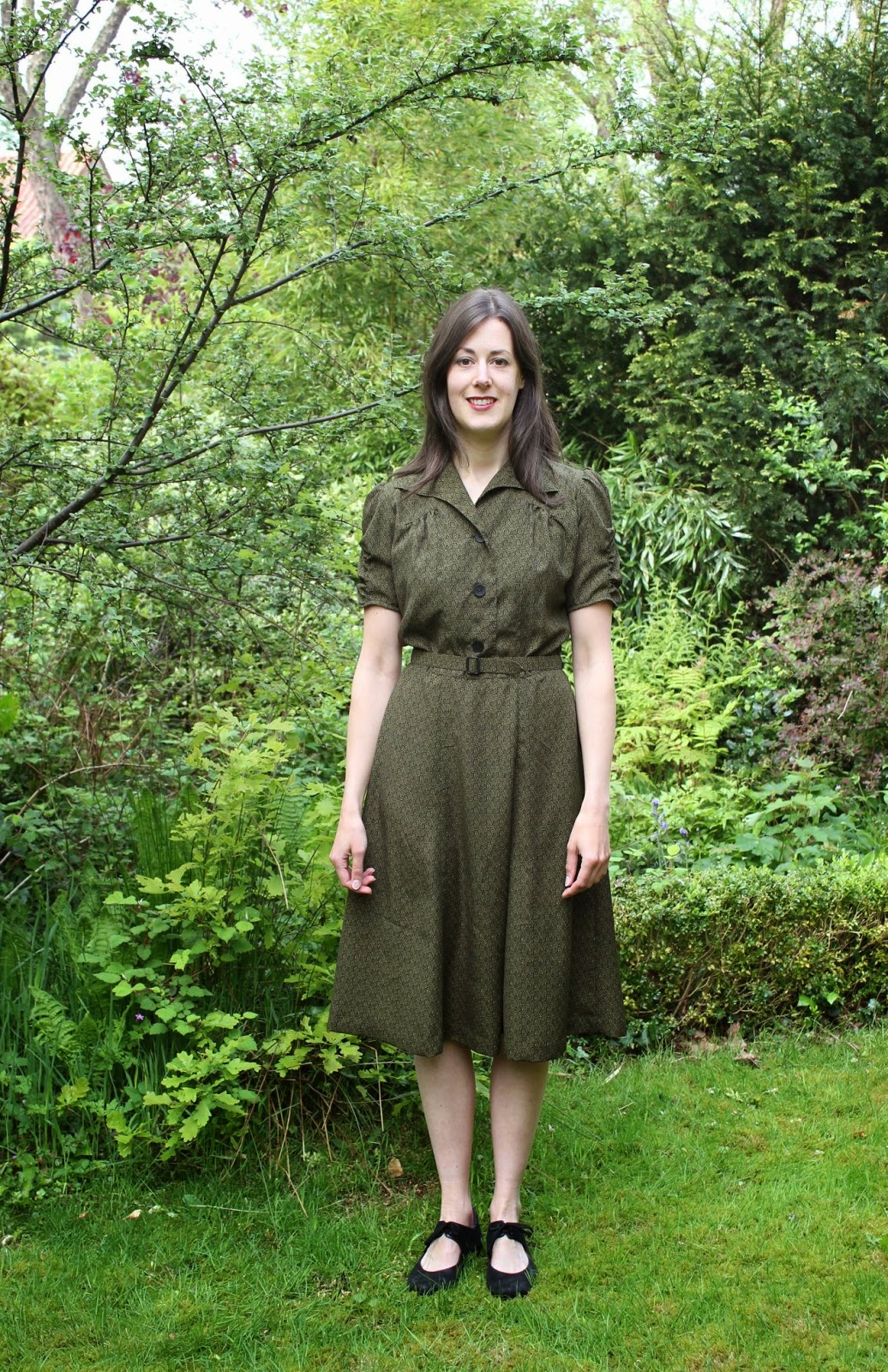 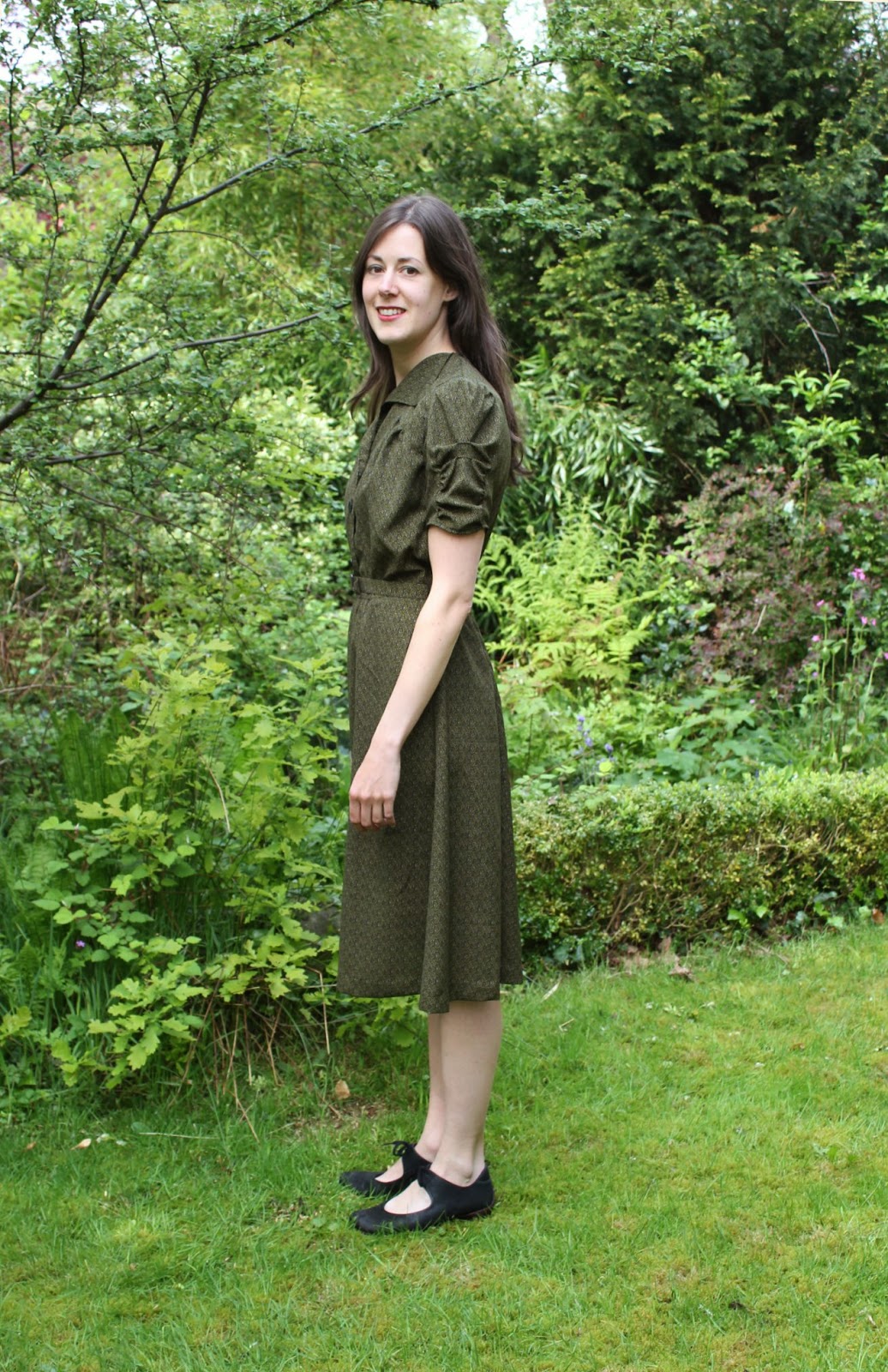 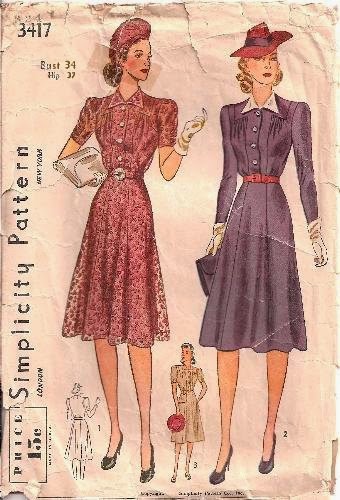 The fabric was a bit nasty to work with, mainly because it pulled. I really had to keep all the seams stretched as much as possible to get them to look alright, and some I sewed with pattern paper in between, which worked well. The fabric’s quite thin, but the even thinner cotton I used for my Teens blouse, for instance, didn’t pull at all. I do really like the leafy pattern, though.
The fabric appeared to be rayon, that is, until I melted a hole into it with my iron :s. Strange, as I actually ironed the fabric several times before, but maybe I used less heat those times. Of course the hole was at the centre front, but luckily, besides having a layer of facing behind it which made it less visible, it is also covered entirely by the overlap from the other side of the front.

At first I found the sleeve design for the short sleeve rather peculiar, but I quite like it now. The instructions said to sew all seams at 1/2” except the underarm seam, which should be sewn at 3/4”. I took that to mean both the sleeve underarm seam and the bodice underarm seam, but the sleeves would have hugged my arms if I had made the seams that big, which I didn’t think looked very nice, so I didn’t. Maybe I also shouldn’t have made the bodice side seam that big (but then the bodice would have become wider than I liked), because now the sleeves were too big for the arm hole! So I gathered the tops, which already had three in-sewn pleats. But then I found them too puffy at the top, so I pulled the fabric down and hand-sewed it down lower on the sleeve, which actually looks nice.

I made a belt of the same fabric, using fusible waistband to make it firmer. This was in my mum’s stash and had a very old logo of the favourite Dutch shop Hema on it, but it still worked very well. I picked the belt clasp to match the buttons.

I also almost finished a blouse in time for the Sewalong; I only need to put the sleeves in, but I’ve got some issues with the pattern. It should be my size, but I had to take it in a lot, and now the shoulders are still really wide. So I could probably have finished it by tonight, but I prefer taking a little longer and doing it right.

I’ll add some detail photos later!
Posted by misshendrie at 21:56