Phew, over the past month and a half I was so busy sewing that I didn’t have time to post the items I finished! But I did manage to finish nearly everything I wanted to make, including the seven 1940s-style items I mentioned before, and I will be posting everything shortly. Here’s the first item, a circa 1911 long-line corset.

From this year to 2018 there will be lots of World War I centenary events. With my re-enactment group I will portray a military nurse, and my other group will play the upper class inhabitants of Huis Doorn. The first time I wore my teens blouse I wore my Victorian corset underneath, but that’s so old-fashioned for this period that I decided to make a proper corset.

I came across the Bridges on the Body 1911 corset sewalong, which has a free pattern as well. This has only five pieces and no gores, which I preferred over the other pattern because I felt like making a nice simple corset, as well as a supplies list and step-by-step instructions, so I thought using the sewalong would be very handy.

First I printed the pattern at 100%, then calculated that in order to fit my waist, I should print and cut it at 350%. I did some more alterations to get a proper fit, though.

Thanks to the sewalong I found out about pre-cut and finished bones, which I didn’t even know existed, and luckily there’s a webshop in the UK which sells them. I found them very handy to use, they save a lot of effort and because they don’t need caps, those thicker parts don’t show through the fabric. Also, they aren’t expensive at all.

Here’s a photo of my supplies: 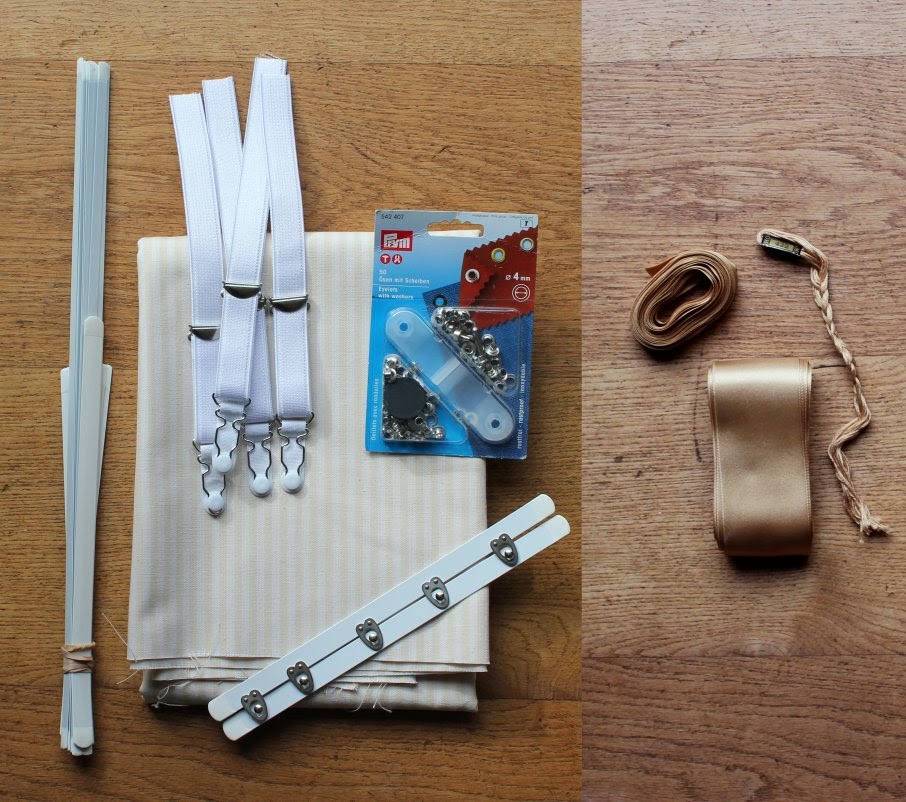 I had one metre of fabric. It was firm and non-stretch, but I decided it was a bit too thin after all, and the bones were visible through it. So I cut two layers of fabric and treated them as one.

The fabric may seem like quite a neutral colour, but I had to go to four different stores to find ribbon that matched it! Then I did find lace that matched the ribbon, though =). The DMC embroidery floss is from my mum’s stash.

I don’t generally understand instructions, so I deviated from the sewalong in quite a few instances.
The instructions, based on an extant Edwardian corset, said to cut openings for the busk loops. I decided against that as my material frayed quite a bit. So I sewed on a facing, leaving openings in the seam. Also, I didn’t sew below the busk. That didn’t seem necessary to me as the studs and loops sticking through the fabric will keep the busk in place, and it didn’t seem very pretty to me.

I followed the instructions for cutting strips of coutil on the bias because they’re supposed to make the casings “lie smoother against the curves of the body”, although I wondered whether that made any sense in my case, as the ribbon that went over them was non-bias ribbon. I couldn’t find 5 cm wide bias tape; in fact, I don’t think I’ve ever seen such a thing in my country. So I bought satin ribbon to use for the bone casings, trim at the top and bottom of the corset, and for covering the suspenders. I do NOT recommend using satin ribbon in such a way, or, in fact, for anything else than tying a hat to one’s head or making a nice bow. It frays, splits, you easily pull loops when removing basting thread...
The ribbon was ironable, so I managed to put it through my bias maker. It frayed so terribly though, I had to vacuum my ironing board! I sewed the casings to the corset as quickly as possible to prevent further fraying. I thought the boning channels would be too thick to sew by machine, but they weren’t. I actually had to baste them in place only once, for ‘stitch in the ditch’.

Grommeting went fast! A lot faster than it did on my Victorian corset made out of coutil. I didn’t cut holes in the fabric, but rather, pushed the fabric apart using an awl (or actually knitting needles of 2 to 5 mm thick!). This makes for a stronger construction, making it impossible for grommets to fall out, or the fabric around them to tear, which can happen with cut holes.

The sewalong supplies list isn’t entirely correct. It lists 6 garters when only 4 are needed for this type of corset, and also doesn’t mention that they should have wider clips and wider elastic than the standard type! I ordered those, so I had to fumble a bit with the covering to make them look as intended. The number of bones is incorrect, too; I had four left over. There should have been separate lists for the two different types of corset, I think.
The bias width given, 18-19 mm, also seems wrong. I sewed 9.5 mm channels for the 7 mm wide bones, and as two bones are placed alongside each other on most seams, obviously it is not possible to sew those channels using a 18-19 mm casing. Luckily I bought a 3-pack of bias makers which also included a larger size. 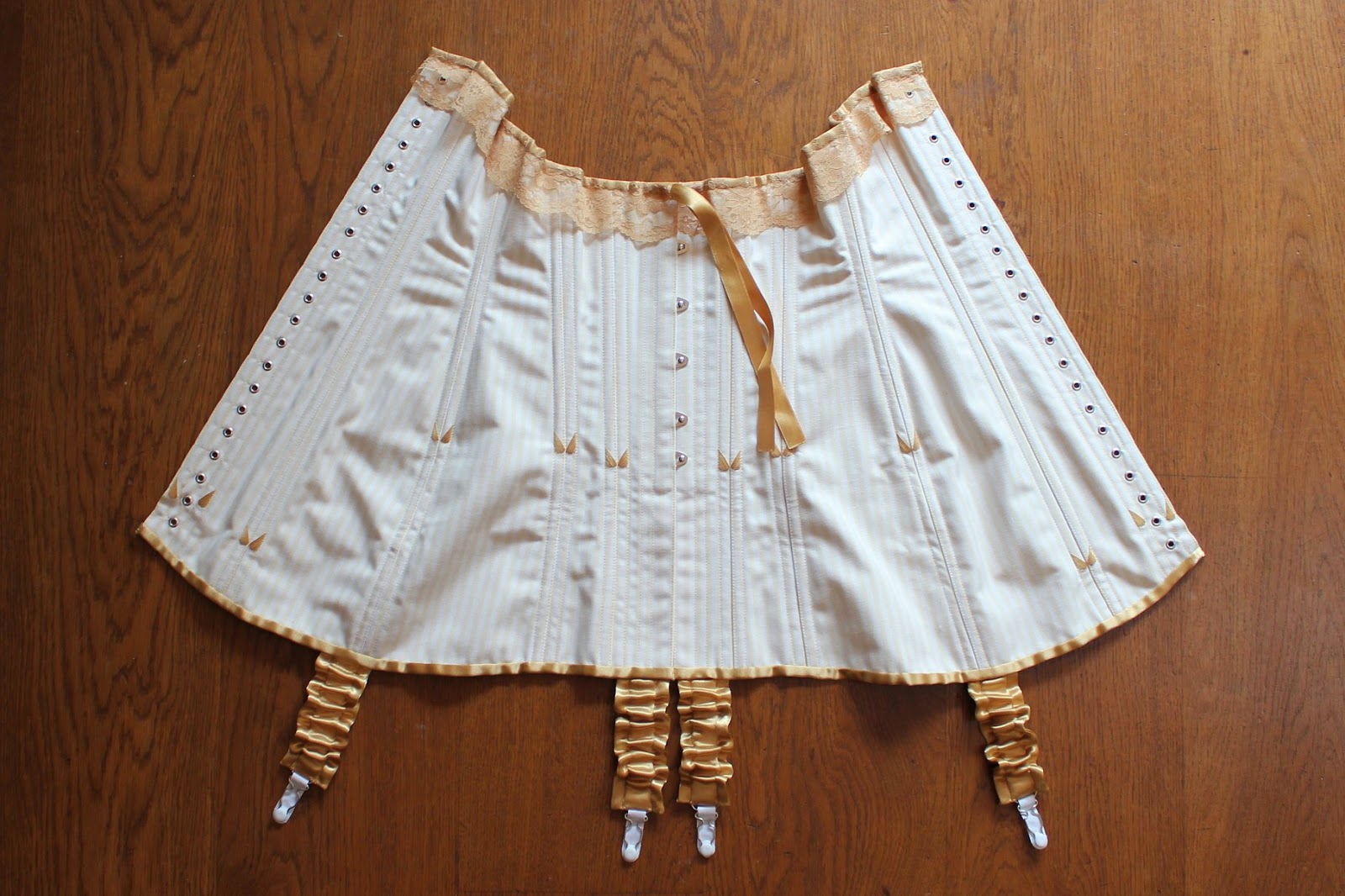 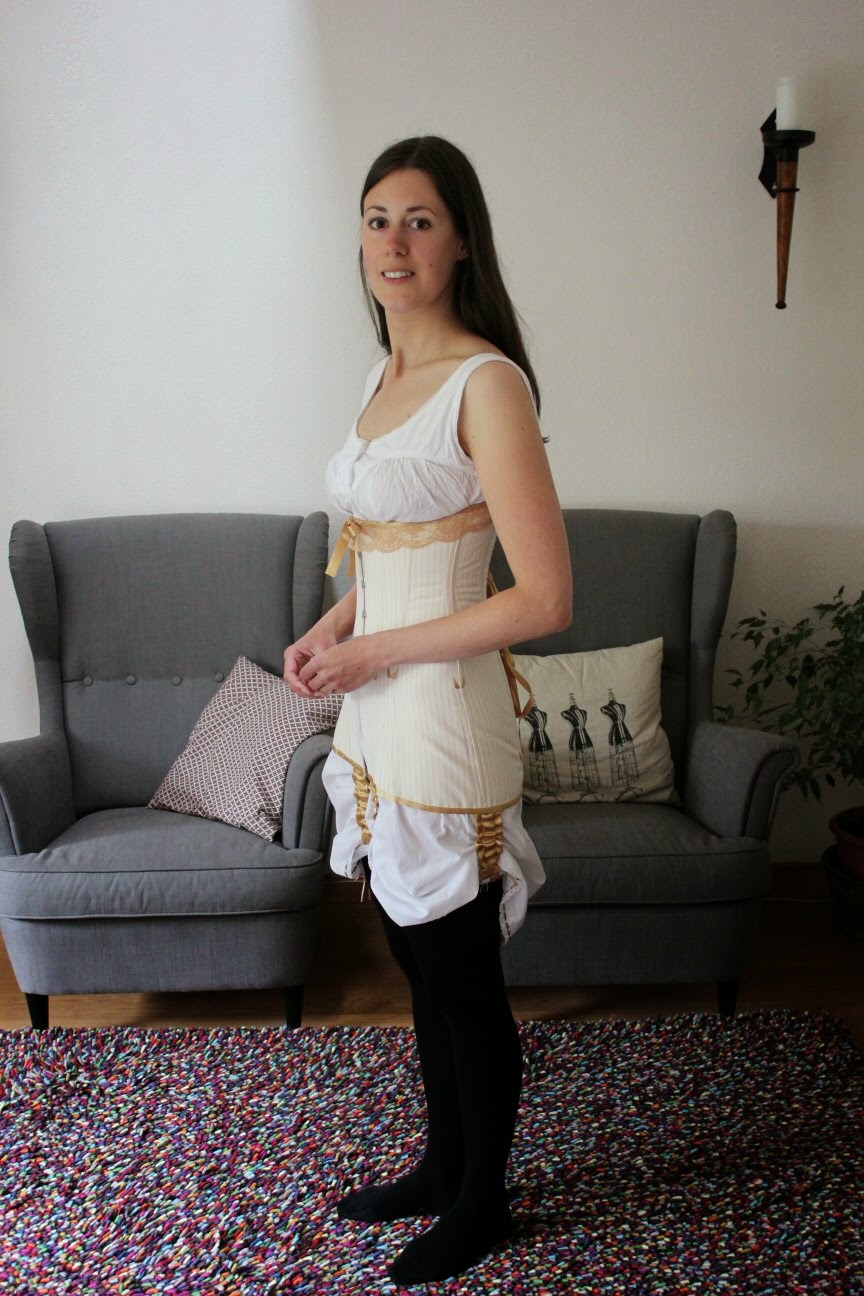 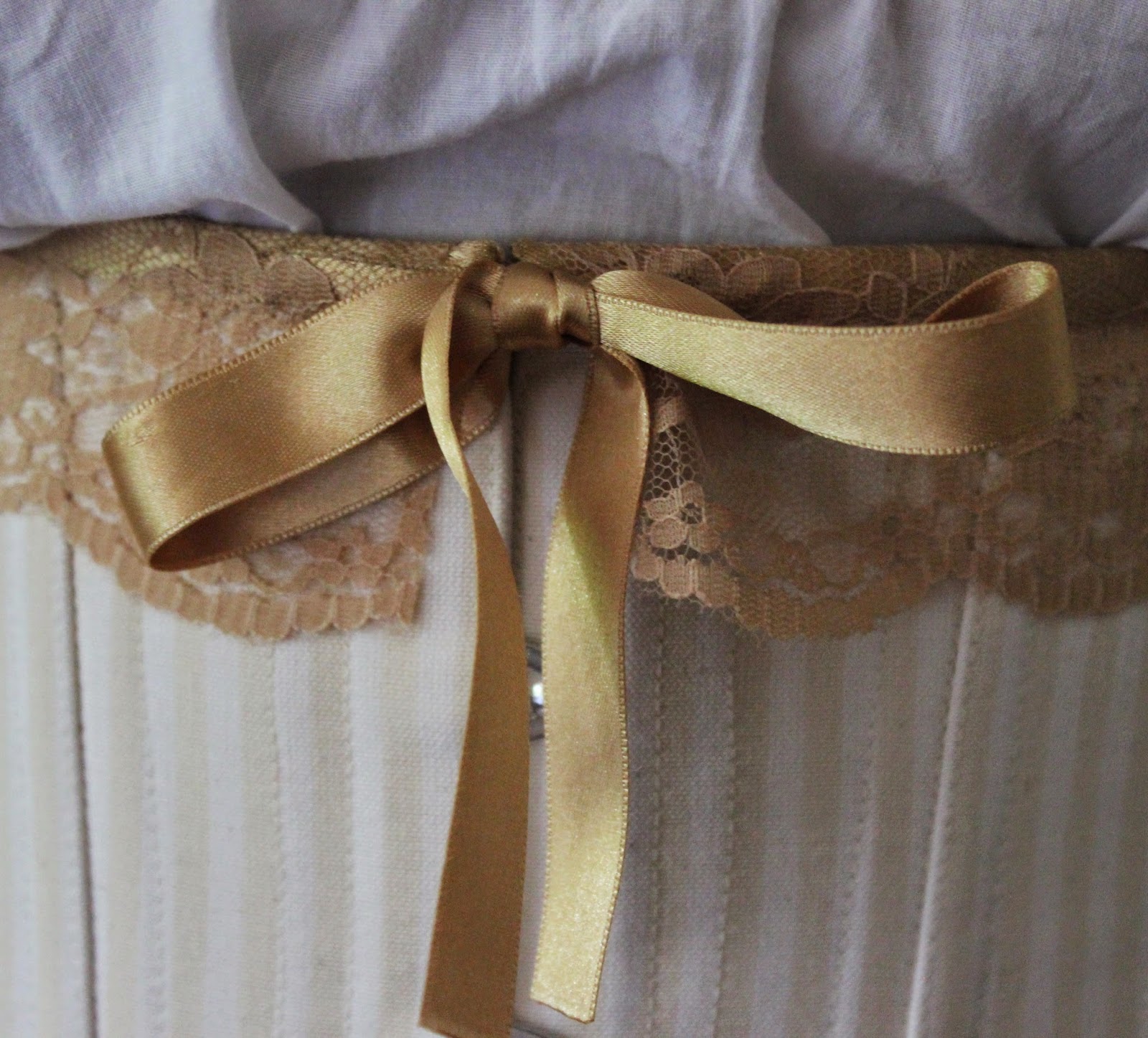 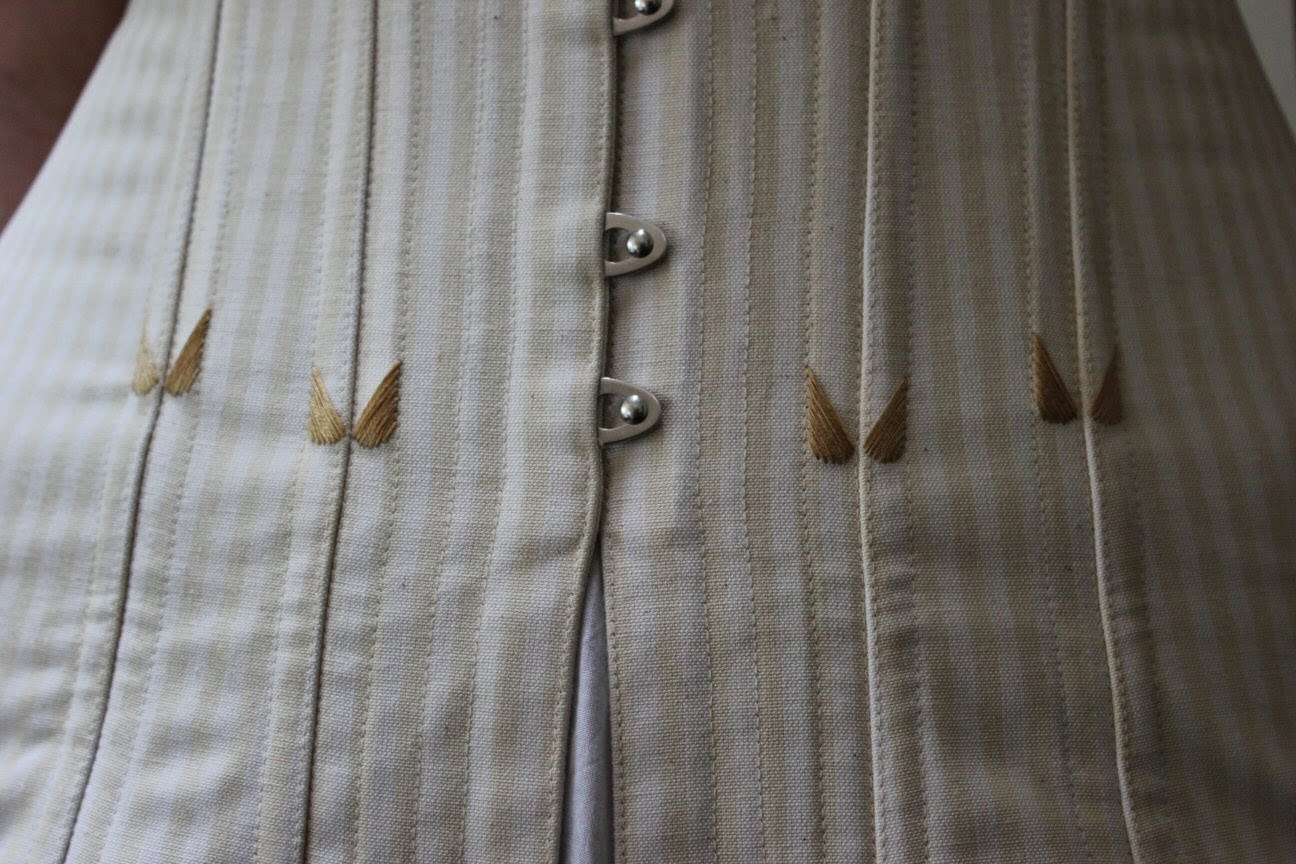 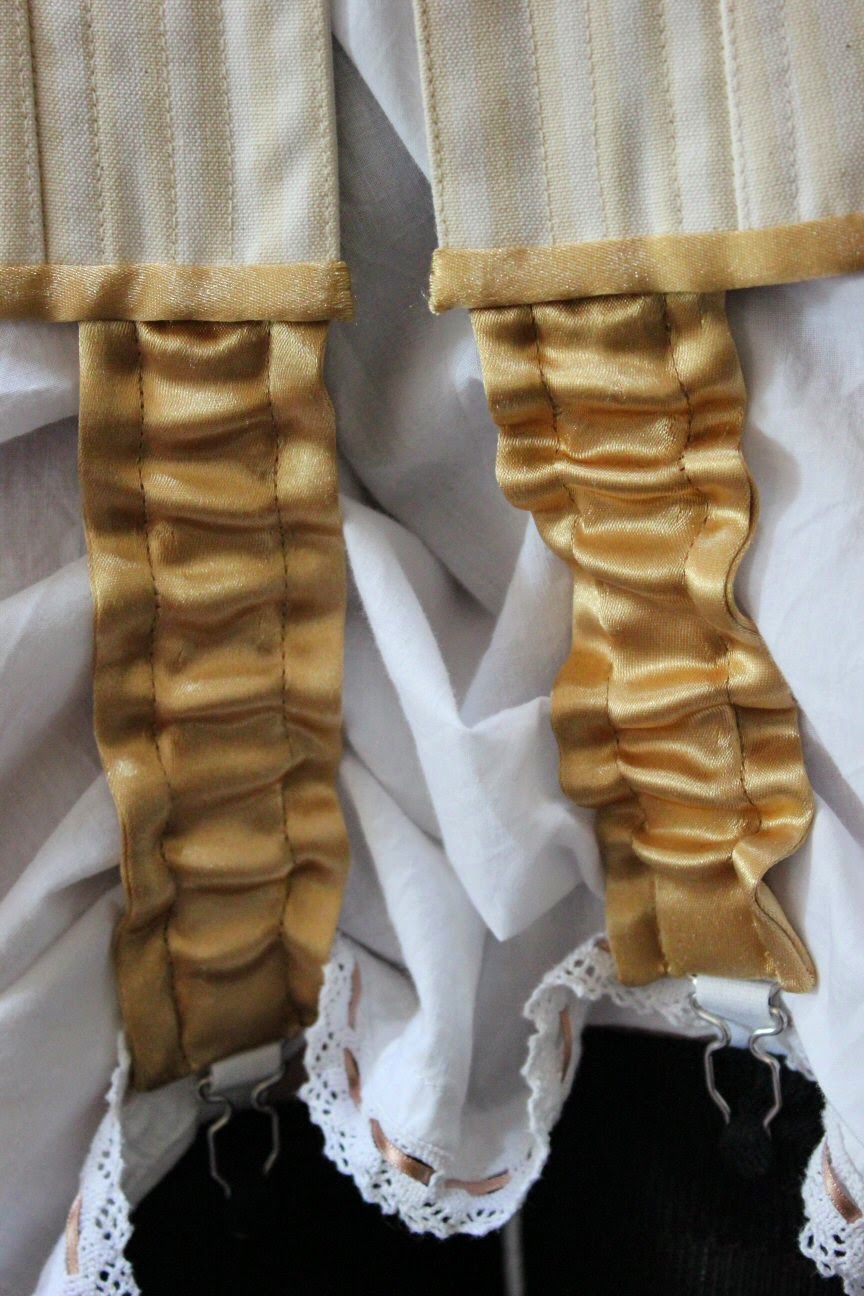 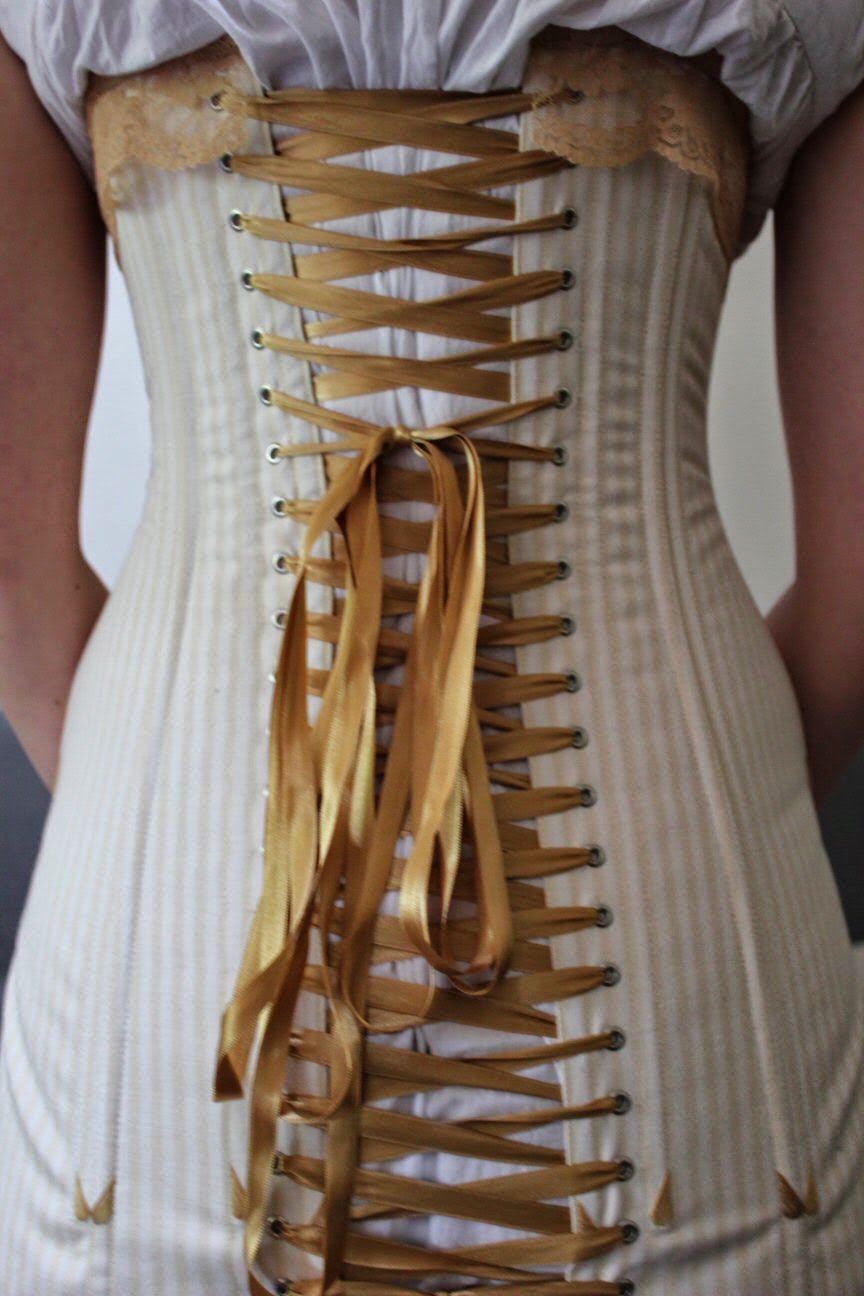 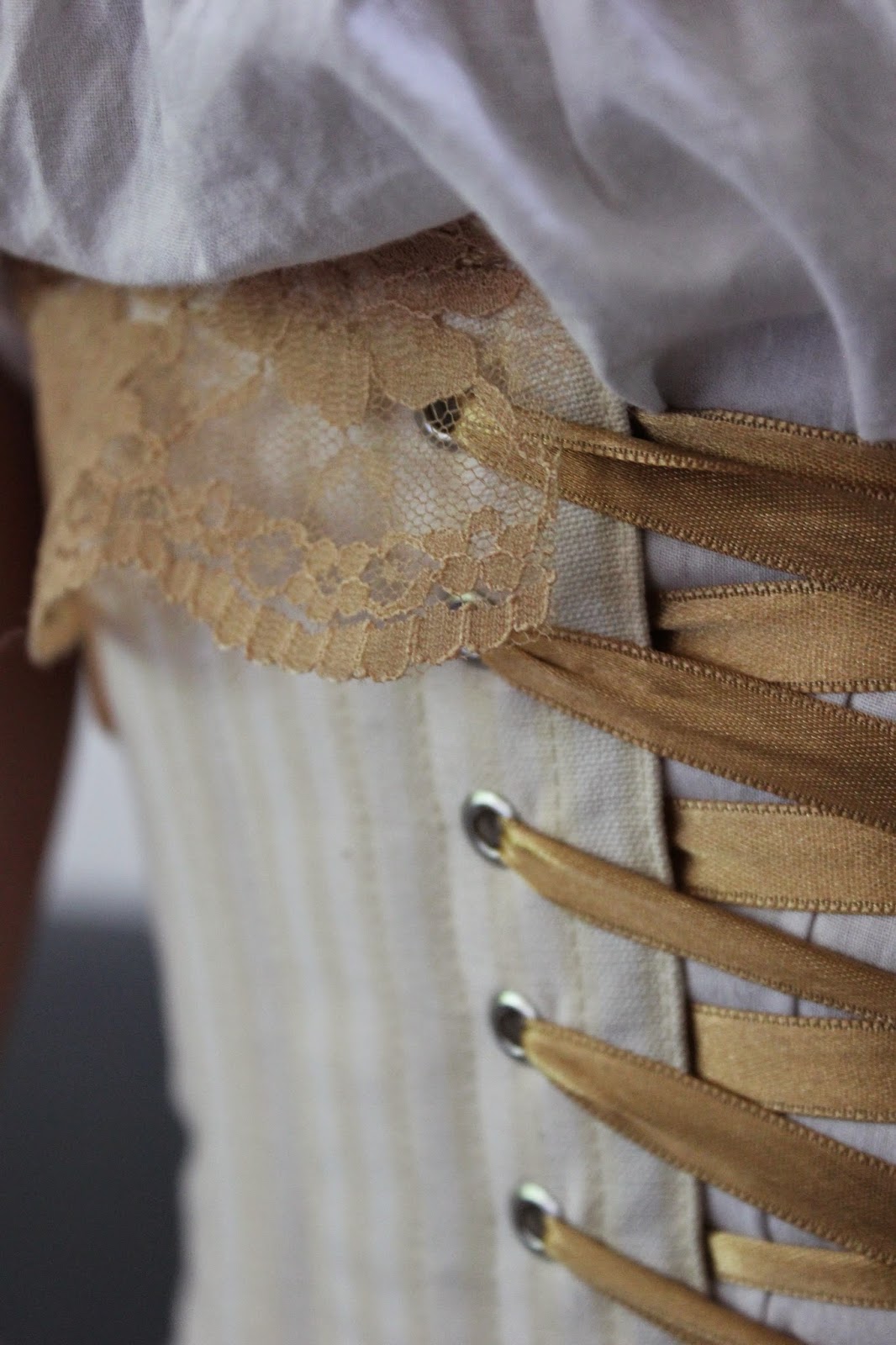 My mum proudly showed my finished corset to a friend of hers, who exclaimed that she hoped I would wear the corset as outerwear! I replied that was not my plan, and she thought that was such a shame. But I did actually do a WWI ladies’ underwear presentation with Welmode at a Living History event we attended at Huis Doorn on 24 and 25 May, so people got to see the corset after all. 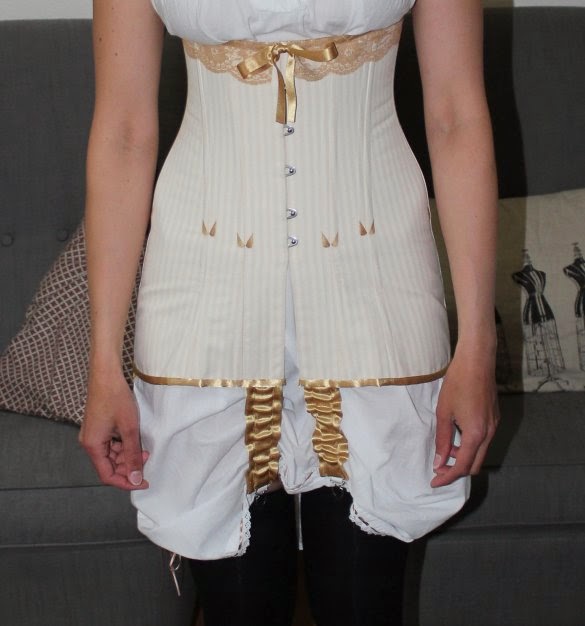 Unfortunately the corset does not give me the smooth shape I’ve seen on some others online – my hip bones stick right through it, as you can see on this photo! As the boning on the side runs right over my hip bones that becomes very painful after a while, so I’ve sewn thick shoulder pads onto the inside at that spot, which helps.


ETA: I’ve removed the corset bones running directly over my hips. I don’t know whether my hip bones stick out more than most people’s, but the shoulder pads weren't enough to prevent rather bad pain, especially when walking! The shape I get when wearing the corset is still the same without the boning, and it’s a bit more comfortable that way.
Posted by misshendrie at 19:48