The Sew Monthly Challenge: February – Colour Challenge Blue: Make an item that features blue, in any shade from azure to zaffre.

Fabric: Blue 100% cotton chambray, 3.4 m white cotton for lining and 0.5 m for the sleeves, 50 x 56 cm white cotton lawn, thicker white fabric, red wool.
Pattern: Burda 125 Cassaque, heavily modified.
Year: 1914-1918 (the duration of WWI).*
Notions: Dress: 11 mother of pearl buttons, 0.65 m thin white cotton band. Cap: 70 cm twill tape, 80 cm thin white cotton band. Sleeves: two white buttons. Brassard (arm band): 9 sq. in. red wool, two safety pins. Apron cross: 20.25 sq. in. red wool.
How historically accurate is it? We certainly tried to make it as accurate as possible. Our research included period sewing instructions for this specific uniform, photographs of originals, and period photos of VADs wearing the uniform.
Hours to complete: Dress: I'd rather not say. Too many. Cap: unknown, I made it before. Sleeves: 3 h 15. Brassard: 1 hour. Apron cross: 6 minutes.**
First worn: Nurses and stretcher bearers training weekend on 7-8 March.
Total cost: €39.60. About €15 for the quilt cover, €10 for the lining fabric,€3 for the lawn, €3.60 for the buttons,and €8 for the leather belt. The rest of the materials I already had.

Last year I and the other nurses in my group made a World War I QAIMNS Reserve nurse’s uniform using a chambray quilt cover from H&M. Later we decided to make voluntary nurses’ (VAD) uniforms as well, mainly because besides the grey chambray, H&M had a light blue version as well, which was just perfect for a VAD dress. 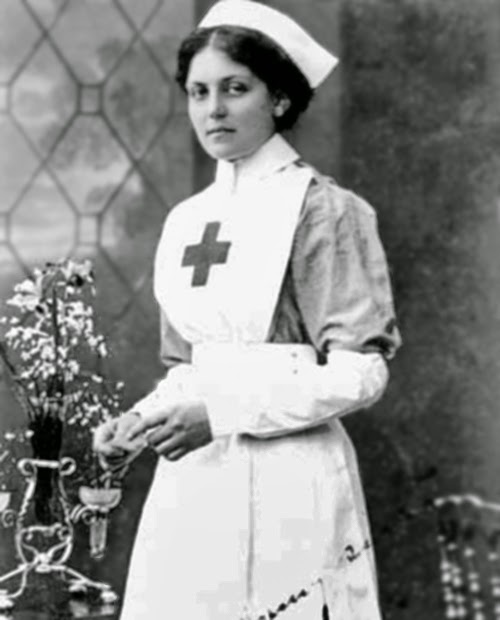 QAIMNS nurses were professional military nurses who had had extensive training. VADs (Voluntary Aid Detachments, or Very Adorable Darlings, as they were also referred to by the troops), however, were volunteers, often from the middle and upper classes, who were often frowned upon by trained nurses and initially had to do non-medical tasks such as cooking and cleaning. A shortage of trained nurses resulted in VADs being allowed in overseas military hospitals though, and actually doing nursing work. As the VADs became more skilled, the trained nurses also became more accepting of their presence and work in the hospitals.

We’re going to do hospital displays this year, so it seemed nice to be able to portray both QAIMNS nurses and VADs. This fabric is so pretty, a lovely sky blue or baby blue, and also nice to work with. I like it so much that I have bought an additional quilt cover to make a modern dress out of it, as well. The VAD dress itself is a bit less charming – it’s basically a sack! :P We used a simple Burda pattern which had a similar shape, but altered it to meet the original regulations we found, which said, for instance, that the dress should be 1 m wide (on both sides, so 2 m in total) at the bottom, and how much space the tucks required. So we really only used the arm hole and sleeve parts of the pattern, and even altered those.

There is an original VAD uniform in the collection of the Imperial WarMuseum. The close-up photographs of the dress show it’s quite hideously sewn – these dresses were clearly mass-produced at low cost. I didn’t attempt to match this ugliness, though it came in handy sometimes. I’m a perfectionist, but when I found myself considering doing a seam again because it was not quite as neat as I’d like, I’d think ‘still neater than the original!’ and just carry on =).

Besides the dress, the uniform consists of a brassard, black leather belt (worn when the apron is not), white fabric belt, cap, apron, collar and over sleeves; the latter four need to be starched. The apron is the same I wear as a QAIMNS(R), but with a red cross sewn onto it. The collar and white fabric belt are also the same. 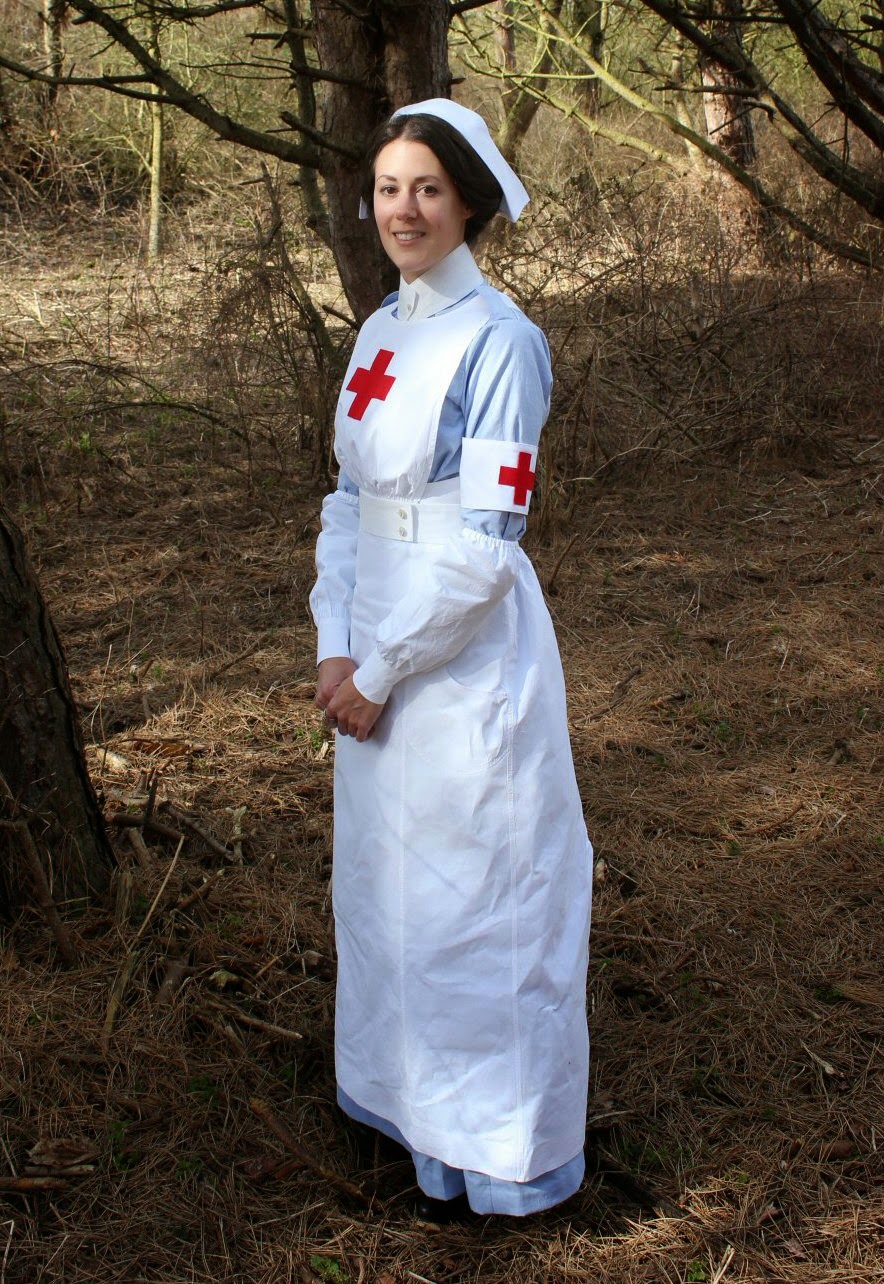 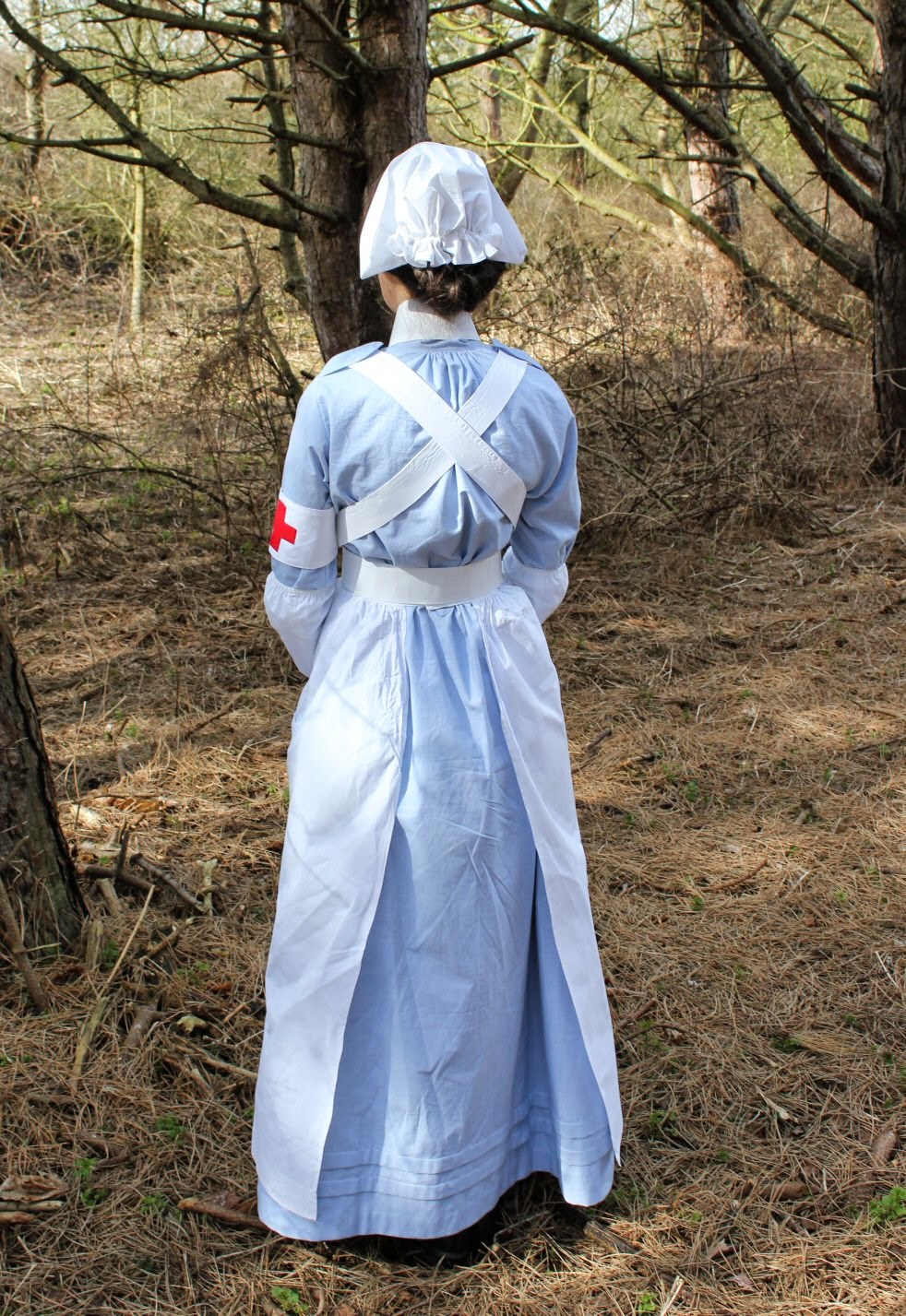 We’ve got a training weekend coming up during which of one of our nurses’ boyfriend, who is a male nurse in real life, will be teaching us old-fashioned medical techniques and also some contemporary first aid. I’ll be wearing my uniform there, and will post pictures of the uniform in action, and detail photos, afterwards! I'll also have ironed the dress better by then... ETA: Photos added! I love the look of this uniform, it's so much cuter than the QAIMNS one. The cap is quite flattering, I think :).

This is what the dress looks like without the apron. It's basically a sack! 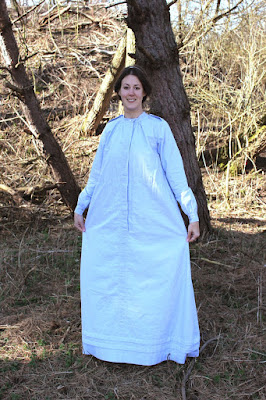 When off duty, the sack could also be worn with a black leather belt. As you can see, the front box pleat has an opening to accommodate the belt. 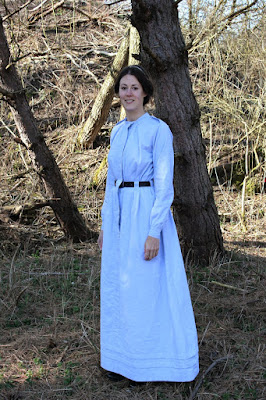 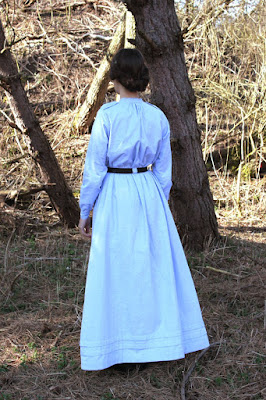 This is the cotton lawn Dora cap laid flat. Hasn’t it got a simple shape? Yet just starching it and tying the strings makes it into a cap. 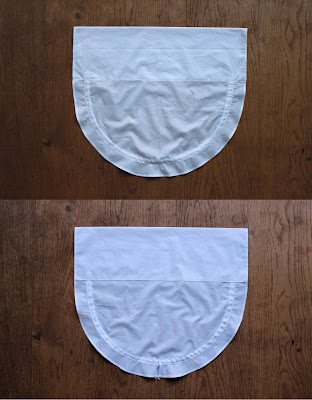 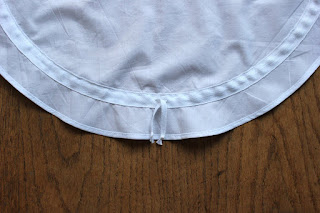 We are also knitting bandages to use in our displays. You can see mine on my Ravelry page!

* Note on year: after 1915 this uniform was worn with a veil instead of the Sister Dora cap, so next year we will change this. The same goes for the collar, which also changed at some point.

** Note on time to complete: these are rough estimates. I tried to track the time, but am apparently rather hopeless at that. First I tried writing it down, but that didn’t work. Then I installed a time-tracking app, but that still didn’t work all that well, since I kept forgetting to either switch it on or off! Once I was driving and realised the app was still running. Once I was in the theatre after dining out, and realised the app was still running and had thus tracked several hours too many. Also, there was no pause button, so things like making tea are included. So as I said, rough estimates :P.
Posted by misshendrie at 09:54