In 2014 I made a World War I QAIMNS nurse uniform, and I’ve worn it a lot since, at several memorable World War I events. My group has, for instance, portrayed a hospital stationed inside a country house, at Museum Huis Doorn.

Now, we’ve added the ‘walking out’ or parade version of the uniform to our repertoire. This means: no apron, no cuffs, a hat instead of a veil, and white gloves. 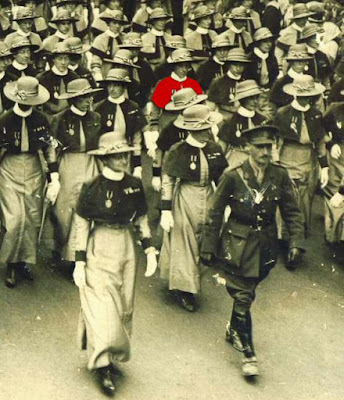 The hats, naturally, we had to fashion ourselves. Here’s a QAIMNS hat from the collection of the Imperial War Museum, which I used as my main example: 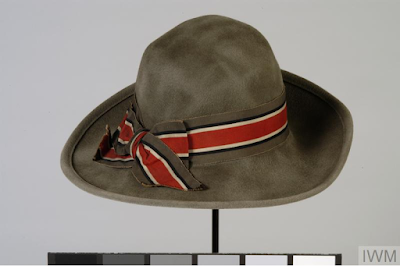 We ordered a number of grey wool felt hats, but they had a pretty weird shape, with a round rather than an oval crown. This made it hard for me to get the hat to fit properly, because the brim would get wavy when I put it on, but some steam pressing did improve it.

Unfortunately we could not buy the same ribbon that was used at the time. We could have had some made, but only by the roll of 200 metres or so, and we needed about 10. But as the colours were similar to Iron Cross ribbon, we used that, and sewed grey ribbon onto it.
To make the ribbon fit around the crown without all too much puckering, I eased the different ribbons onto each other. First I eased the Iron Cross ribbon onto the top grey ribbon, and then I did the opposite, easing the bottom grey ribbon onto the Iron Cross ribbon. It’s quite amazing how big an effect this had on the shape of the ribbon, as you can see below (the left part of the ribbon was sewn normally, without easing on).

I made the flat bow out of three different pieces of ribbon, since actually tying the ribbon into a bow would have made it bulkier than the bow on the IWM hat.

And here’s the hat sewn up: 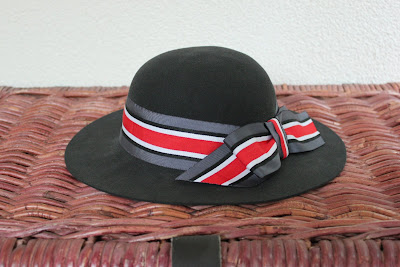 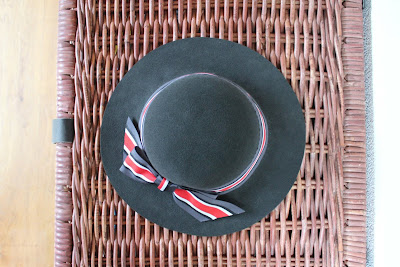 We first wore the walking out uniform at the recent Passchendaele event at Zonnebeke in Belgium. It was particularly suitable to wear to the remembrance church service. 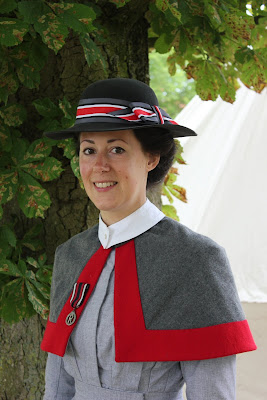 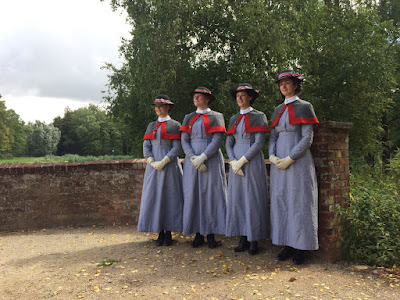 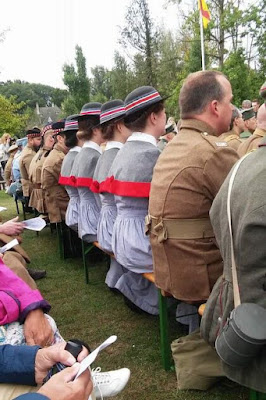 Even our hairstyles were uniform here! =)
Posted by misshendrie at 13:07